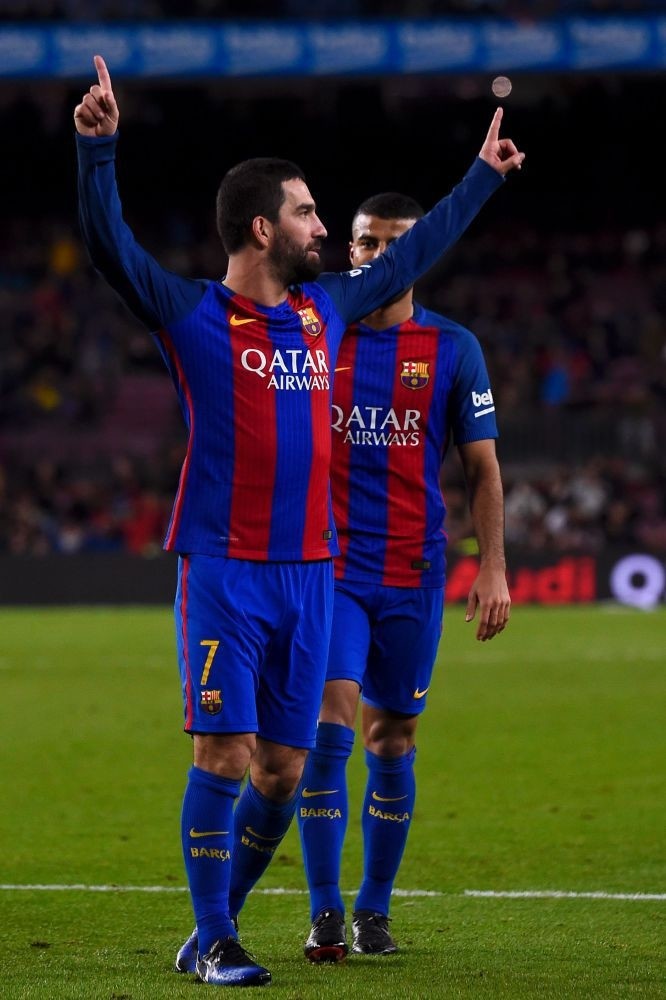 Turkish international Arda Turan continues to perform well for Barcelona. The midfielder was in the spotlight again after his second hat trick for the Spanish side in a 7-0 game against Hercules in the Copa del Rey

Barcelona's reserves got the job done in the second leg on Wednesday, leading the Catalan club to the round of 16 of the Copa del Rey with a 7-0 rout of third-division Hercules.

After being held to a stunning 1-1 draw in the first leg, a hat trick from Arda Turan helped the second-stringers to a comfortable victory on their home field at Camp Nou.

The defending champions got off to a slow start, but the game opened up after defender Lucas Digne got on the boards with a shot from inside the box in the 37th minute. Midfielder Ivan Rakitic added to the lead by converting a penalty just before halftime, and Rafinha, Turan and Paco Alcacer scored in the second half. Alcacer's goal was his first in a competitive match since joining Barcelona this season. He had netted in a friendly last week. "We had to be patient," Rakitic said. "After the first goal, everything was easier."

Despite the first-leg setback, Barcelona coach Luis Enrique stuck to the reserves and gave some extra time off to Lionel Messi, Luis Suarez, Neymar and Gerard Pique after they played in the team's last league game of 2016 over the weekend.

Turan, who joined Barcelona from Atletico Madrid last year after spending the beginning of his career with Turkish club Galatasaray, is no stranger to hat tricks in Spain. Though he scored only one hat-trick during his stint in Turkey, Turan garnered praise for three goals against Borussia Mönchenglabach in a Dec. 6 UEFA Champions League match that gave him the crown as player of the week in the European competition.

The Turkish player endured criticism in Spain after what Spanish media dubbed an "unnecessary" foul one minute before an El Clasico match against Real Madrid that brought a draw for Barcelona in the fourteenth week of the La Liga season. What followed was more accomplishment for Turan who scored six goals and two assists since then. The 29-year-old midfielder scored 11 goals and six assists in the 2016-2017 season, in 19 matches. Turan was also crowned as the sixth player with the most hat-tricks in Barcelona's history, next to the likes of Rivaldo, Ronaldinho, Samuel Eto'o, Lionel Messi and Neymar. Turan has joined Barcelona to the tune of 34 million euros and was off to a slow start as he was given little time at the start of the season.

Once critical of the Istanbul-born player, Spanish sports media has heaped praise on Turan after his hat trick against Hercules. El Mundo Deportivo said Turan made some 64,000 fans at the stadium forget three star scorers Neymar, Messi and Luis Suarez. Sport newspaper likened to a Brazilian player and said that the Turkish player was a real talent coming to the aid of coach Luis Enrique, citing a playing time of 1,233 minutes this season. The Marca daily said Turan, with his capability to

play midfield and forward added much to Barcelona and was a key player for the team. The Marca report on the match also said Turan improved his performance after rumors over his fondness for the nightlife. El Pais said Arda Turan became the fourth scorer for Barcelona in the absence of the team's three stellar players Neymar, Messi and Suarez.

Turan, Rakitic, Rafinha and Javier Mascherano were the only seasoned players starting against Hercules on Wednesday, which marked the team's final game of the year.

The Copa del Rey will resume in the first week of January.

On Tuesday, Atletico Madrid beat third-division club Guijuelo 10-1 on aggregate after a 4-1 win at Vicente Calderon Stadium, while Real Madrid had already reached the next round by eliminating third-division team Cultural Leonesa.
RELATED TOPICS