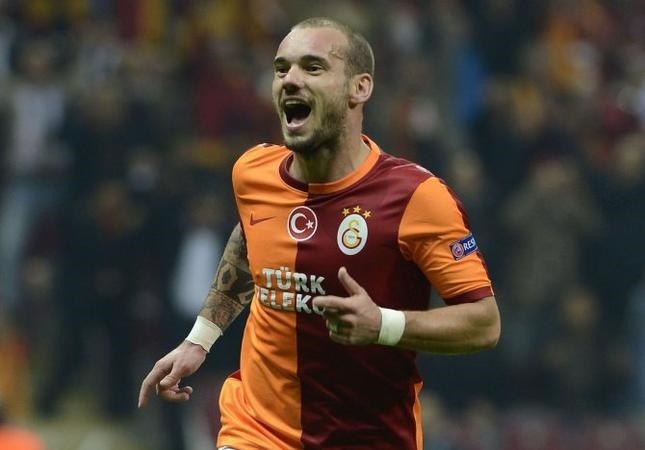 After Sneijder's mother told him and his wife Yolanthe to leave Istanbul after the terrorist attack on a night club, Sneijder said he was happy in Istanbul. Fenerbahçe Ülker's Italian star Datome and Beşiktaş's former striker Nouma also gave similar messages

After a deadly Daesh terror attack in an Istanbul nightclub, which killed 39 people on New Year's Day, international footballers have recently emphasized that despite the commotion they feel safe in Turkey.

Following the recent terrorist attack in Istanbul, Sylvia Sneijder, the mother of Galatasaray's famous Dutch star Wesley Sneijder, said on a TV show in the Netherlands, "My son and daughter-in-law Yolanthe used to often go to that night club. I'm very worried. I told them to leave Istanbul. But my son said he is happy and won't leave."

Sneider had said "I feel like I am a Turk" after a charity match on Dec. 22 for the benefit of terror victims at Istanbul's Vodafone Arena located next to the site of a recent terror attack. Sneijder and his wife Yolanthe have been living in Istanbul for four years and their first child Xess Xava was born in Turkey.

"I was in France with my family in the new year. The terror not only hit Turkey but it also hit the world that night. While the terror attack was happening we were in a night club in Cannes. When we heard about what happened at the Reina night club we all went back to our homes out of fear. When I looked around I saw that we were just two people left. What I want to say is that terrorism not only hit Istanbul but also it hit the world. Their target is to spread fear worldwide," Nouma wrote.

Fenerbahçe Ülker's Italian star Luigi Datome also chimed in, "The aim of the terrorists is to prevent us from living our daily lives and having fun. I will continue to travel in Turkey as long as I find the opportunity. Turkey is a very beautiful country. I am trying to tell everyone how beautiful Turkey is."

Another star of the Fenerbahçe football team, Brazilian Josef de Souza, commented on his club's official TV channel saying, "Turkey is a spectacular country. I am happy in Istanbul. I adapted to this country. Istanbul is a wonderful city. Some horrible events happen in the entire world. I can say that Turkey is definitely safer than Brazil. I am grateful that I'm living in Turkey. Turkish people are continuing their lives without fear despite the terror attacks."

Turkey attaches importance to sports in its struggle against terror. Istanbul's Vodafone Arena, home to the "Black Eagles" Beşiktaş, hosted a cha

rity match last month for the benefit of the terror victims.

President Recep Tayyip Erdoğan kicked off the "Respect to Martyrs" event where Turkish and international players showed off their skills for the charity event. The event collected some TL 50 million ($14.24 million) in aid for the victims in an attack that took place right next to the stadium, killing 45 people.

On Dec. 10, just a few hundred meters away from the stadium, a suicide car bomb claimed the lives of riot police officers and civilians and was followed by a suicide bombing that killed five police officers near Maçka Park.

The match, announced earlier this week at a meeting of club presidents and sports officials, was primarily a display of unity against terrorism and spectators reflected this atmosphere in the stadium.
Last Update: Jan 04, 2017 1:03 am
RELATED TOPICS