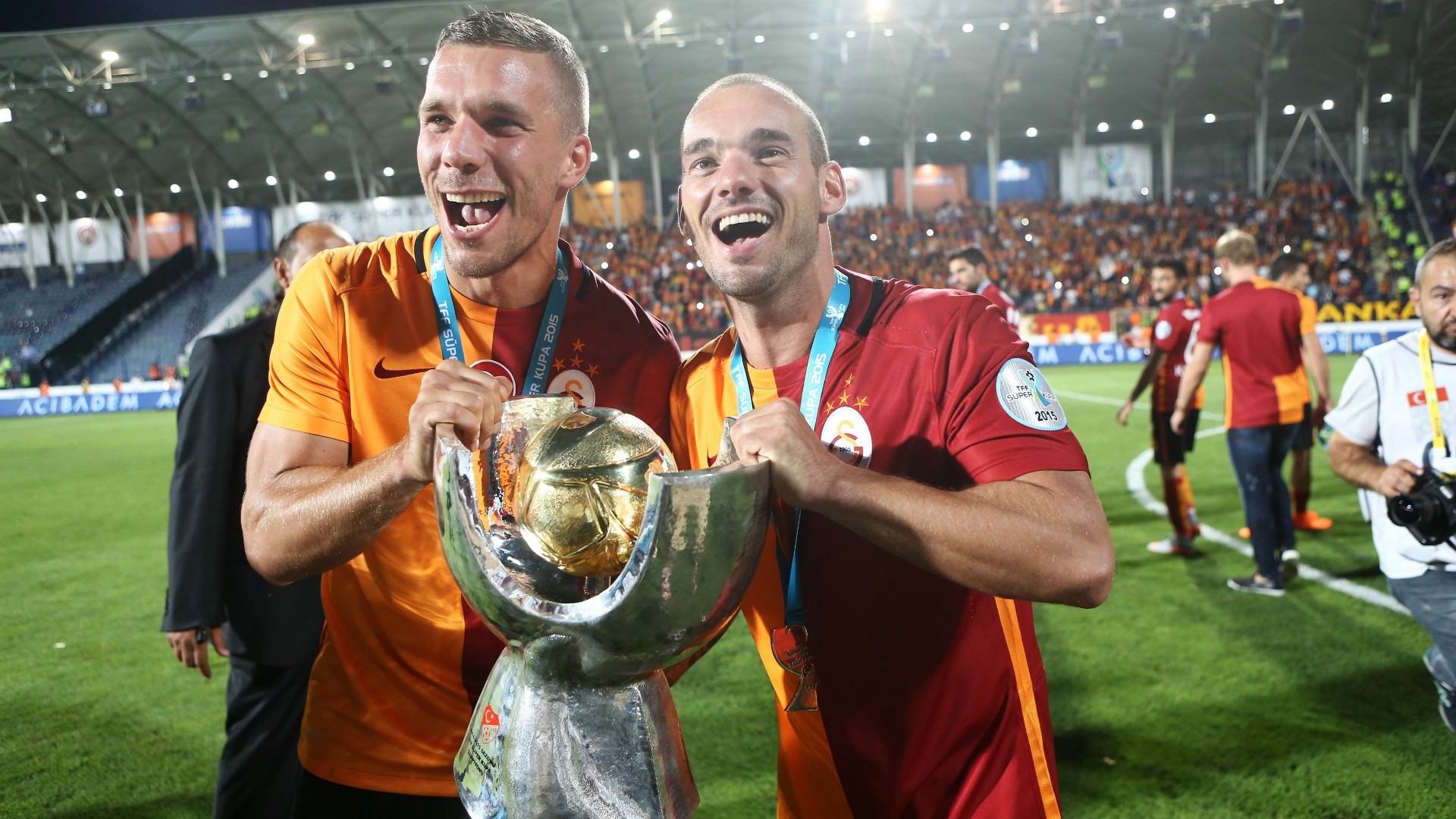 Galatasaray players Lukas Podolski (L) and Wesley Sneijder hold the trophy during a victory ceremony after Super Cup match between Galatasaray and Bursaspor in Ankara in 2015.
by Hakan Baş
Jan 06, 2017 12:00 am

Activity in the Spor Toto Super League's transfer window is heating up in the first week of the new year. Although Galatasaray's Dutch star Wesley Sneijder recently explained he was happy in Istanbul, he is the latest top European name wanted by a Chinese Super League club, according to media sources. Voetbal International claimed Beijing Guoan and another unnamed club are courting the 32-year-old Dutchman. It is rumored that his possible transfer price is around 36 million euros.

Sneijder has been with Galatasaray since leaving Inter Milan in 2013, and his contract runs out at the end of next season. Should he move to Beijing, he would link up with a former teammate from the Turkish giants in Burak Yılmaz. While an offer to move to the Chinese Super League may be tempting financially, it remains unclear as to whether Sneidjer would be keen. Sneidjer has recently seen Oscar join Shanghai SIPG in a deal worth 60 million pounds before Carlos Tevez moved to city rivals Shanghai Shenhua, to become the world's highest-paid footballer.

Galatasaray said last week that they had been approached with a remarkable offer from Chinese Super League club Beijing Guoan for the German retired international Lucas Podolski, whose contract with the Yellow-Reds runs till 2018.

He went further to say that the Yellow-Reds are thinking through the offer, to see its possibility. "We are considering this offer," Nazifoğlu said.

"Whether this transfer is realized is dependent on the player," he concluded.

Meanwhile, Nazifoğlu did not specify the price that was offered for Podolski's services, but it is suggested that the likely fee is in the region of 6 million euros.

Galatasaray's archrivals Fenerbahçe and Beşiktaş have already signed footballers in the winter window. Title holders Beşiktaş have signed free agent Ryan Babel on a two-and-a-half-year deal. Babel, 30, spent the first half of the season at Deportivo La Coruna before his contract with the Spanish club expired on Dec. 31.The Black Eagles also reinforced their defensive line with Croatian stopper Matej Mitrovic.

Shakhtar midfielder Alexander Karavayev, who is on loan with Zorya, will continue his career at Fenerbahçe.

According to Zorya's official website, Fenerbahçe head coach Dick Advocaat, who likes Karavayev, addressed the football club, Shakhtar Donetsk and the player personally with an offer about the transition.