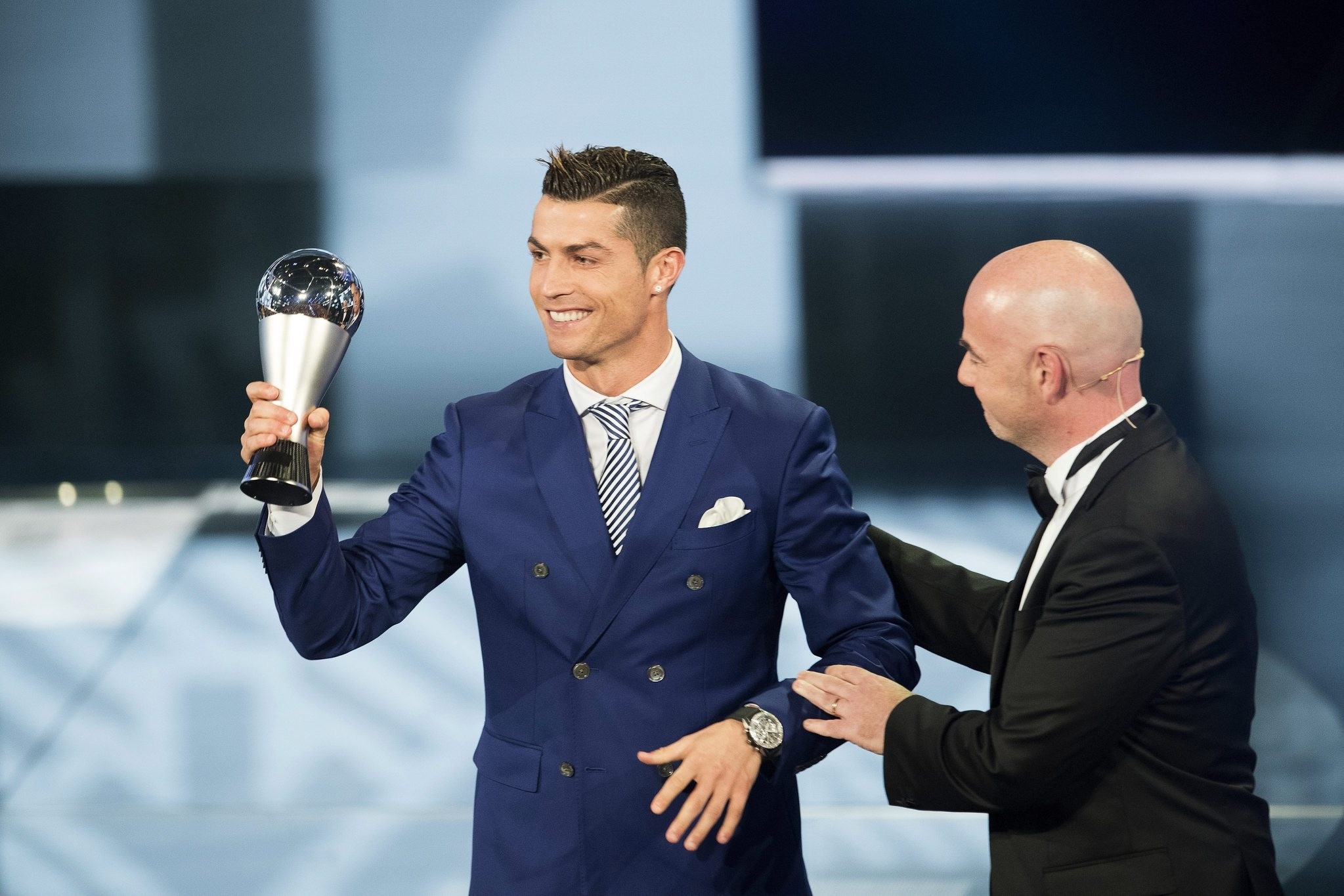 Ronaldo (L) lifts his trophy after winning the FIFA Men's Player of the Year 2016 award during the FIFA Awards 2016 gala at the Swiss TV studio in Zurich, Switzerland. (EPA Photo)
by Associated Press Jan 09, 2017 12:00 am

He beat runner-up and great rival Lionel Messi and Antoine Griezmann to complete a sweep of top individual awards.

"2016 was the best year of my career," Ronaldo said in Portuguese in his acceptance speech, which he began by exclaiming "Wow, wow, wow."

Ronaldo got 34.54 percent of total voting points in a 23-candidate ballot. Messi received 26.42 percent, and third-place Griezmann got 7.53 percent. Voting was by national team captains and coaches, selected media, and fans online.

Ronaldo's fourth FIFA award closed the gap on five-time winner Messi, the runner-up to each Ronaldo victory, who did not attend the ceremony.

Messi's Barcelona won the Spanish league and cup double, though he captained Argentina to lose the Copa America final.

Ronaldo's coaches for club and country were beaten by Leicester manager Claudio Ranieri, who earned the men's coaching prize for a stunning English Premier League title.

"What happened last year was something strange. The God of football said Leicester must win," said Ranieri, who was in his first season at the unfashionable provincial club widely tipped for relegation.

Ranieri collected his trophy from Diego Maradona, who earlier Monday played in an exhibition match with other retired greats at FIFA headquarters.

Like Ronaldo, Carli Lloyd of the United States won a FIFA player prize for the second year in a row.

"I honestly was not expecting this," Lloyd said. "I know Melanie did fantastic in the 2016 Olympics."

The Puskas Award for best goal was won by Mohd Faiz Subri, who scored with a wildly swerving long-range free kick for Malaysian club Penang.

The First FIFA fan award was chosen by fans and was made to supporters of Liverpool and Borussia Dortmund, who joined in singing the English club's anthem "You'll Never Walk Alone" before a Europa League quarterfinal. The other nominees were Iceland fans at Euro 2016, and Dutch club ADO Den Haag, whose fans brought soft toys to children supporting rival team Feyenoord.

FIFA made its Fair Play Award to Atletico Nacional, the Colombian club which was scheduled to host Chapecoense in the first leg of the Copa Sudamericana final on Nov. 30.

After most of the Brazilian team died in a plane crash flying to the match, Atletico Nacional asked the South American soccer confederation to present the title and trophy to Chapecoense.