Syrian football pros seek to kick it for Turkey 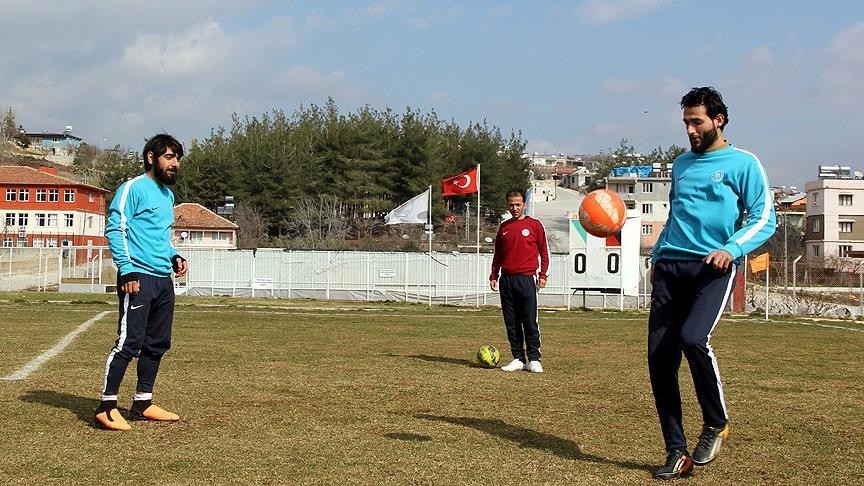 Players keep their skills sharp by training in the absence of an opportunity to play in a professional club.
by Daily Sabah with AA Feb 17, 2017 12:00 am

Hoping to resume their professional careers in Turkey where they are taking shelter, footballers from war-torn Syria are asking to be issued licenses that would make them eligible to play for Turkish teams

They endured a war that devastated their country and survived the attacks that killed thousands in a six-year conflict but sports remain an integral part of their life. Professional football players from Syria, Turkey's southern neighbor, now live in safety in a country that hosts nearly 3 million refugees. Longing to competing in a professional league, Syrian athletes are asking the government to help them acquire sporting licenses that would enable them to play for professional Turkish clubs.

Many work in other jobs for a living in Turkey and fear their skills may not be as sharp as they were before as they only occasionally take to the pitch in informal matches to keep themselves fit for a professional game.

Hussain Hinnawi, a former player for the Syrian Premier League's Hutteen, took shelter in Hatay, the southern Turkish city bordering Syria, three years ago, along with his family. The 24-year-old, who started his career at the age of 14, is unemployed in Turkey.

"From time to time, I train myself so that I do not forget my skills but I don't play for any teams here and I haven't for three years. It gives me pain not to be able to play and I want to continue my career here in Turkey. But they don't give player licenses to those without a passport and even if you have one, license fees are very high. I am willing to play, be it a professional or an amateur club if I am given a chance and I am appealing to the (Turkish) authorities to help us," Hinnawi said to reporters.

Many Syrians, who fled in panic from attacks and traveled with few possessions, do not have passports although they are granted access to public services in Turkey, but football player licenses are exempt from this.

Ahmed Husso, another player from Hutteen who also played for Tishreen, another Syrian Premier League team, plays for Bayırbucak, an informal team formed in Turkey by Syrian refugees. The 22-year-old is among those seeking a professional career in Turkey.

"This is my job and I can't do another job. We have to do something before we get too old to play," he said.

Husso added that Turkish teams sometimes contact them to set up a transfer, not knowing that they are ineligible to play in Turkey. "We ask Turkey to apply the same rules they do to local players for player licenses for Syrians too. I can play in an amateur or professional league," he said.

Ahed Haznedar, a trainer for Bayırbucak, said he tries to keep Syrian players fit for football.

"But they have to make a living. They work in menial jobs, in construction jobs. Most do not have passports or documents proving they played in the professional league in Syria. We have many talented young players here and I believe Turkish football can benefit from them. I invite officials from the Turkish Football Federation to come here and see how good they are with their own eyes. They have to help them," he says.

In Syria, professional sport remains in tatters with many professional players having either left the country or joined the ranks of the opposition fighting the Assad regime. A football federation still exists but the league is often disrupted by the ongoing war, with clubs forced to quit tournaments as their training grounds take hits in the conflict and their coffers quickly run empty in the face of a dwindling economy.
RELATED TOPICS