Beşiktaş knock-out Hapoel Beer-Sheva, move on to the last 16 in Europa League 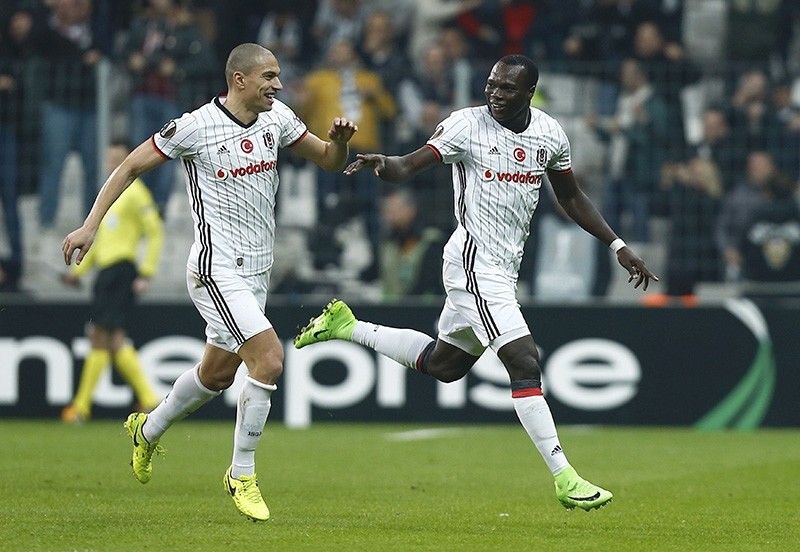 Gu00f6khan Inler and Vincent Aboubakar from Beu015fiktau015f react after scoring a goal against Hapoel Beer-Sheva in the UEFA Europa League Round of 32 Second Leg game at the Vodafone Arena, Istanbul, on Feb. 23, 2017. (Reuters Photo)
by Daily Sabah Feb 23, 2017 12:00 am

With Fenerbahçe and Osmanlıspor disappointing their fans by getting knocked-out in the round of last 32 in Europa League, Beşiktaş is now the only club representing Turkey at the European stage, eliminating their opponents Hapoel Beer-Sheva with a 2-1 win and moving on to the round of 16.

Having scored a 3-1 win in Israel, the Black Eagles had the upper hand against their opponent and were comfortable throughout Thursday's match in Vodafone Arena in Istanbul. Vincent Aboubakar - scoring his fourth goal in Europe this season - and Cenk Tosun scored the goals bringing victory to Beşiktaş at the 17th and 87th minutes, respectively. Anthony Nwakaeme scored the Israeli team's only goal at the 64th minute.

The Black-Whites extended their unbeaten strike in European home matches to seven, two wins and five draws, including four 1-1 stalemates. Beşiktaş are now undefeated in six games against Israeli opponents, with four wins and two draws (W1, D1 in Turkey).

Beşiktaş winning against Hapoel Beer-Sheva also marked the first Europa League victory in Vodafone Arena, which replaced the old Inönü Stadium located in the same spot and inaugurated in April 2016.

The opponent of Beşiktaş in the round of 16 will be determined with a draw on Friday at 1:00 p.m. CET.

Meanwhile in Ankara, Osmanlıspor were defeated 3-0 by Greek club Olympiacos (0-3 aggregate) and knocked out in the round of 32 in their maiden season, leaving Beşiktaş as the sole Turkish football team competing in Europe.

Fenerbahçe were knocked out by their Russian opponent Krasnodar on Wednesday upon a 1-1 draw in Istanbul.