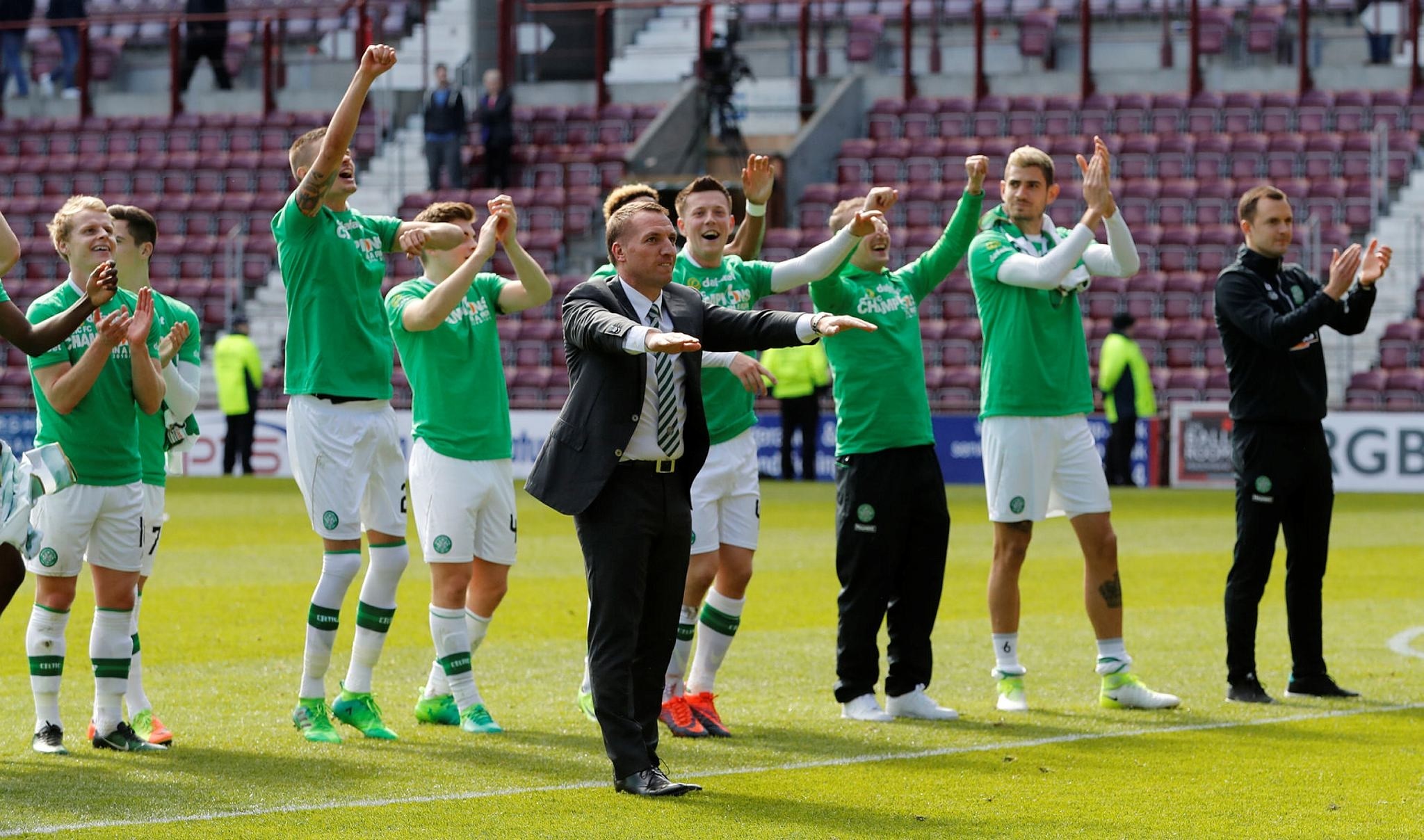 Brendan Rodgers' unbeaten side established an insurmountable 25-point lead by beating Hearts 5-0 on Sunday, a 28th victory in 30 league games. The only draws came away at Inverness and then at home to Glasgow rival Rangers.

Celtic's unbeaten run across three domestic competitions currently stands at 36 games. The Glasgow team coached by former Liverpool manager Rodgers won the Scottish League Cup in late November and is also through to the semifinals of the Scottish Cup.

Celtic is still three titles from matching the club's record run of success from 1966 to 1974.

This league campaign started at Hearts in August with a 2-1 victory sealed by Scott Sinclair scoring on his debut — and he netted a hat trick in Sunday's return trip to Edinburgh.

Celtic has demonstrated its prowess, even with Rangers back in the top flight after a four-year absence resulting from a financial meltdown.

There were no wholesale changes to the squad inherited by Rodgers from Ronny Deila.

Rodgers brought in the experienced former Manchester City and Arsenal defender Kolo Toure to help out at the back in the early stages of the campaign.

He tempted the exciting 20-year-old French striker Moussa Dembele from Fulham and he has gone on to score 17 league goals, plus 15 more so far in other competitions.

Scotland striker Leigh Griffiths, who scored 40 goals last season, has been often been consigned to the bench although he missed Sunday's game through injury along with Dembele.

Rodgers has rejuvenated the career of Sinclair since bringing the former Manchester City and Aston Villa attacker to Scotland.

"When I signed, I expressed myself to say that I wanted to enjoy my football again, get my form back, which I have, and just be under a manager who believes in me," Sinclair said after taking his Celtic tally to 21 goals on Sunday. "And you can see that on the field and I'm just enjoying every minute of it."

Rodgers has also impressed transforming players who under-performed under Deila.

He gave a new lease of life to Stuart Armstrong by bringing him in to center midfield — to the point he gained his first Scotland cap against Slovenia.

Belgian defender Dedryck Boyata was a forgotten figure at Celtic Park before Rodgers restored him to the side on a permanent basis at the start of the year.

Mikael Lustig, Jozo Simunovic and Erik Sviatchenko have been solid in defense and skipper Scott Brown has driven the team on again. There have been valuable contributions from players like Patrick Roberts, Callum McGregor, Nir Bitton and Tom Rogic.

The next challenge for Rodgers is to take Celtic deep into a European competition.

A 1-0 Champions League qualifying first-leg defeat away to Lincoln Red Imps of Gibraltar in Rodgers' first game in charge raised eyebrows but the result was overturned in Glasgow and the team advanced to the lucrative group stages of the competition.

A 7-0 defeat by Barcelona was a blot but Rodgers achieved two draws with Manchester City in a campaign which ended with the Scottish champions bottom of their group.