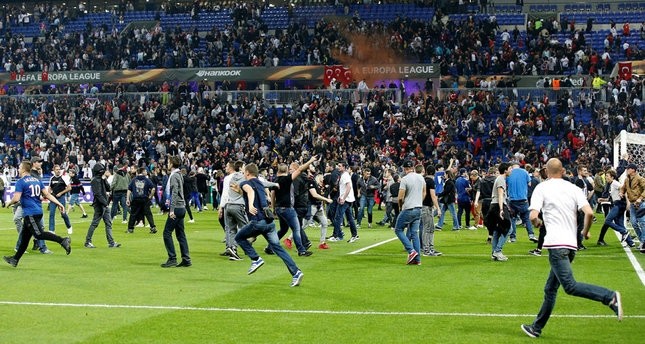 The clubs were also fined 100.000 euros each. If any of the clubs get involved in a similar situation, the offender will be handed a 1-year ban.

Beşiktaş press spokesman Metin Albayrak said that the decision was 'scandalous', and added that the incident was not Beşiktaş's fault.

"This scandalous decision, in no way can be discussed or agreed upon. We previously applied to the UEFA and told them that over 17.000 Turkish citizens were sold tickets. The incident was totally under the responsibility of the Lyon Police Department," he said.

"We will take any required steps for the rescission of this decision," Albayrak added.

UEFA previously charged Beşiktaş and Lyon over last Thursday's violence-marred tie as both clubs blamed opposing fans for instigating much of the trouble.

Beşiktaş were charged with throwing projectiles and crowd disturbances while the hosting team Lyon were hit with four charges, including setting-off of fireworks, blocking stairways, insufficient organization and pitch invasion.

Originally scheduled for 1905 GMT, the start of the quarter-final first leg was delayed by 45 minutes after fans poured onto the pitch after clashes erupted between rival teams' supporters.

Officials attempted to clear the Parc OL playing area of fans, many of whom had run a gauntlet of violence outside the ground which had seen police use teargas in an effort to quell outbreaks of fighting and vandalism.