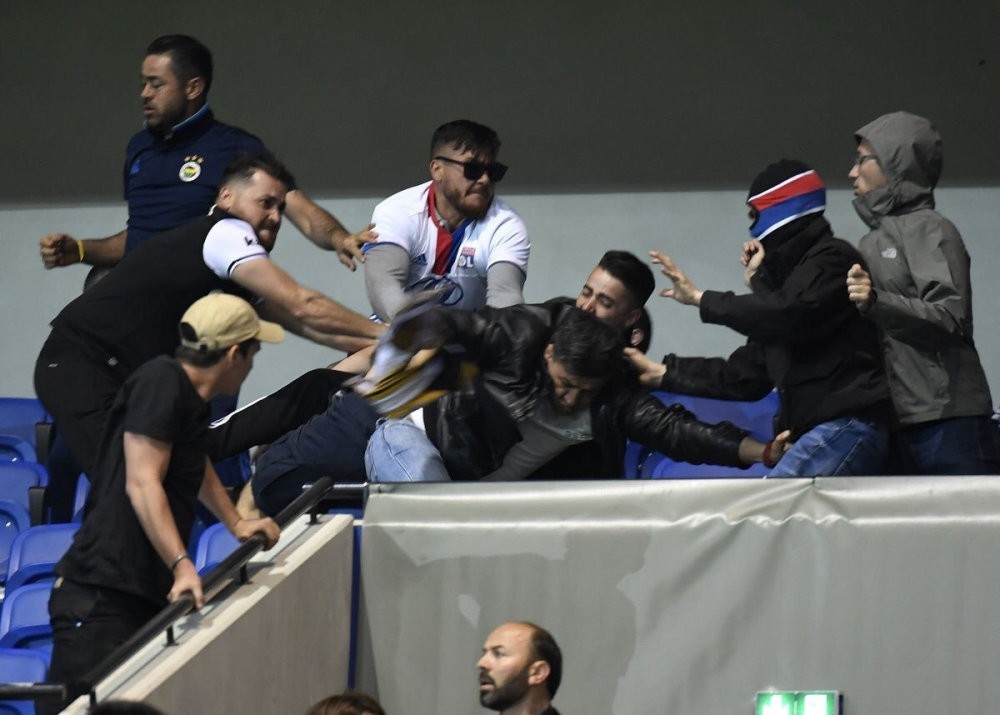 Lyonu2019s fans were so prepared that some of them wore masks before attacking the Turkish fans during the UEFA Europa League Quarter Final First Leg at Parc Olympique Lyonnais on Apr. 13.
by Hakan Baş Apr 21, 2017 12:00 am

After UEFA handed Beşiktaş a suspended ban and financial punishment over crowd trouble in Lyon, the Turkish club and the media have accused the European football body of bias and unfair treatment, underlining the incident happened on Lyon's turf

Beşiktaş were hit with a 100,000 euro fine and a suspended ban from UEFA competitions on Wednesday following crowd trouble at last week's Europa League fixture in France. In a statement, UEFA said the Champions League and Europa League ban was suspended for two years. Lyon were handed the same punishment.

UEFA said the disciplinary body had "considered that the supporters of both clubs were responsible for crowd disturbances at the match." Beşiktaş and the Turkish sports media, however, have reacted angrily to the UEFA decision. The Black Eagles, criticizing the decision, said they are preparing for legal actions against Europe's top football body. Beşiktaş have a legal right to appeal first to the UEFA Arbitration Board and then to the Court of Arbitration for Sport (CAS). The club announced that they would use their legal appeal rights by Friday. Club Chairman Fikret Orman said he will personally plead the court.

Beşiktaş spokesperson Metin Albayarak said, "UEFA has made a scandalous decision. It is obvious that UEFA action was biased. Even though the crowd trouble did not take place on our turf, we received the same punishment as hosts Lyon. The decision is indefensible. They sold 17,000 tickets to Turkish fans. We had informed in advance that we would not be held responsible for any possible trouble ahead of the game; the responsibility belonged to Lyon police. We will do anything and everything to overturn this decision."

Meanwhile, Beşiktaş coach Şenol Güneş slammed UEFA "for putting a bomb on the club's lap by punishing them ahead of the return match."

"I have never seen such an unfair decision in my 50-year career. We did not invade the pitch, the pitch is Lyon's. The fact that they are not bringing their fans to Turkey is possibly a part of the preparation for UEFA's decision," he added.

In a statement on Beşiktaş's website, the Black Eagles warned their fans, saying, "Although the decision is unfair, our fans must act very cautiously."

Previously, a similar ban was put on Turkish powerhouse Fenerbahçe. After the Yellow Canaries reached the Europa League semi-finals in the 2012-2013 season, UEFA had threatened them with an expulsion from the European club competition. It had accused Fenerbahçe fans of launching fireworks onto the pitch from outside the stadium in a silent match they played against Bate Borisov.

Later, UEFA placed Fenerbahçe and its fans on a two-year probationary period, during which a repeat of the offenses would have triggered a ban from either the Champions League or Europa League. As a result, Fenerbahçe had to warn their fans before every European match for the following two years.

The Beşiktaş ban has also caused a stir in Turkish media and it prompted a widely circulated Turkish newspaper, Sabah, to run the headline, "A ban like a threat."Sabah Columnist and Sports Editor Murat Özbostan said, "When the first leg match ended, I wrote that Beşiktaş must be cautious, because these were not coincidences. It is obvious that there must have been lobbying right after the match. This fine must be a joke. As if those who invaded the pitch were Beşiktaş fans and those who did not take necessary measures were Turkish police. Why should Beşiktaş pay for the faults of a French team? It's like handing the same punishment to someone who stabbed somebody and the person who got stabbed. This is clear discrimination. Shame on UEFA. This is in not only Beşiktaş's concern, this is Turkey's concern."

Meanwhile, Daily Sabah's columnist Arda Alan Işık said, "The decision is unkind and political. The problem was not created by Beşiktaş fans, it was rather created by the Lyon fans and the whole ordeal was witnessed by millions of viewers. With the UEFA verdict to put Beşiktaş under suspension and Lyon's decision to not bring fans, the European body has added fuel to the flames. Those who made this provocative decision seemingly do not care about security ahead of the match."
Last Update: Apr 21, 2017 1:09 am
RELATED TOPICS