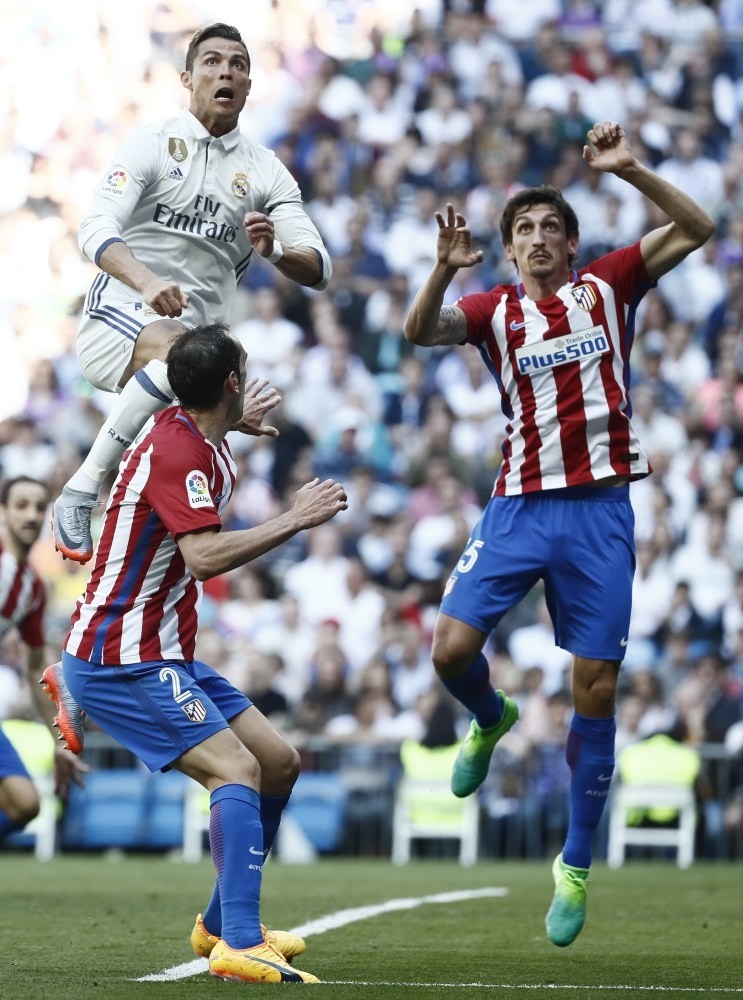 Real Madridu2019s Portuguese striker Cristiano Ronaldo (L) tries to score next to Uruguayan defender Diego Godin (C) of Atletico Madrid during the Primera Division match at Santiago Bernabeu stadium in Madrid on Apr. 8.
by Apr 22, 2017 12:00 am

Holders Real Madrid face Atletico Madrid in the Champions League semi-finals as the city rivals do battle once more and French surprise-package Monaco take on Juventus, following the draw on Friday. The all-Madrid showdown is a rerun of the 2014 and 2016 finals in Europe's top club competition, with a Cristiano Ronaldo-inspired Real victorious on both occasions in cagey affairs that they failed to settle after 90 minutes each time. Real - aiming to become the first team to retain the Champions League - will host Atletico at the Santiago Bernabeu on May 2 and a free-scoring Monaco side brimming with some of Europe's hottest young talents are home to a defensively brilliant Juventus on May 3, with the second legs the following week.

Real Madrid director Emilio Butragueno said: "We know each other very well, this is the fourth time we meet Atletico in the Champions League but it will not be a final this time.

"Every detail will count and we will have to be very careful, they defend very well and have high-quality players who know how to take advantage of mistakes," he told BeINSports. Going into the draw at UEFA headquarters in Nyon, Switzerland all four teams were making the usual noises: there is nothing to choose between any of them, they said publicly.

But the 39-year-old Juventus goalkeeper Gianluigi Buffon broke ranks, saying that he would prefer to avoid a wily Atletico side because they are out of the La Liga title race so can rest players for Europe. Buffon, one of the best goalkeepers of all time but who has never won the Champions League, got his wish in missing out on Diego Simeone's side, who would dearly love to get one over Real and Ronaldo this time on Europe's biggest stage. But instead he must face teenage striking sensation Kylian Mbappe, 18, and a rejuvenated Radamel Falcao.

Pavel Nedved, the former midfielder who is now an ambassador for Juventus, told BeINSports of the Monaco match-up: "It's 50-50. They have very young players who are under no pressure, who can play without fear. Vadim Vasilyev, the French side's vice-president, said they would be motivated by the bitter memories of being turfed out of the competition by the Italians in 2015 in the quarter-finals.

French league leaders Monaco are the outsiders but they have already claimed victims in Borussia Dortmund in the quarter-finals and Manchester City and Tottenham Hotspur before that.

Real Madrid, for whom Ronaldo hit a hat-trick as they saw off Bayern Munich in the quarters, are favourites with British bookmakers. But Juventus were hugely impressive in beating Barcelona 3-0 in the first leg and then holding the Spanish champions to a 0-0 draw at the Camp Nou on Wednesday in a defensive masterclass. The final is in Cardiff on June 3.
Last Update: Apr 22, 2017 1:38 am
RELATED TOPICS