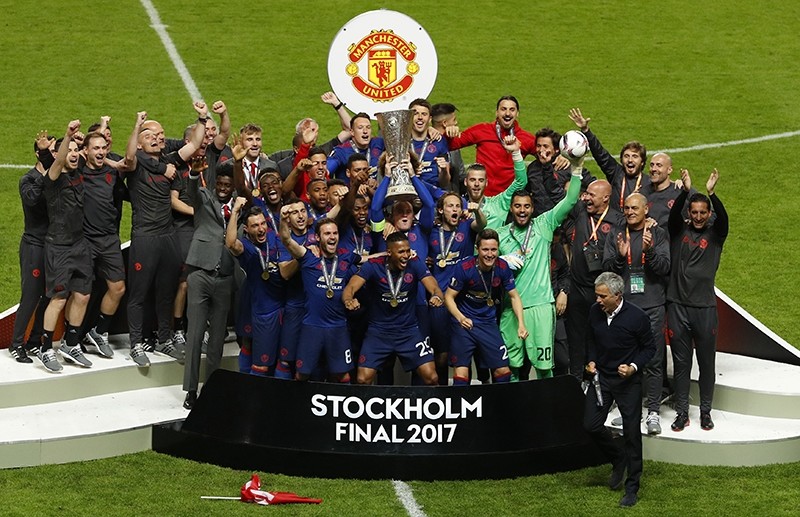 United players celebrate after winning the soccer Europa League final between Ajax Amsterdam and Manchester United at the Friends Arena in Stockholm. (REUTERS Photo)
by Daily Sabah with AFP May 24, 2017 12:00 am

Even after the horrific Daesh terrorist attack in their city, a demoralized Manchester United had a decisive win against Dutch giants Ajax with two goals in the Europa League Final late Wednesday.

The Red Devils' opener came with Paul Pogba at the 18th minute. Just after the second half started, Henrik Mkhitaryan sent the ball into the nets at the 48th minute, bringing the score to the final 2-0.

Players from the both teams observed a minute of reflection prior to the final in memory of the victims of Monday's terror attack in Manchester.

The two teams stood around the centre circle at Stockholm's Friends Arena with their heads bowed during a brief period of silence, United's players sporting black armbands, before fans of both sides burst into applause.

Twenty-two people were killed and dozens injured after a suicide bomber targeted concert-goers leaving a performance by the American pop star Ariana Grande at Manchester Arena.

"We tried our best to focus on the game. It is our job," United manager Jose Mourinho told BT Sport before the match.

"Not with the same happiness, the happiness that a great moment like this normally brings."

United cancelled their pre-match press conference on Tuesday, with Mourinho saying in a Twitter post that he and his players were struggling not to think about the tragedy.

Ajax coach Peter Bosz said the match "doesn't have the glow it should have" following the attack.

European governing body UEFA said it had "no specific intelligence" suggesting the final would be targeted by attacks.

Security arrangements had already been ramped up following last month's truck attack in Stockholm, which claimed five lives and injured around 15 people.