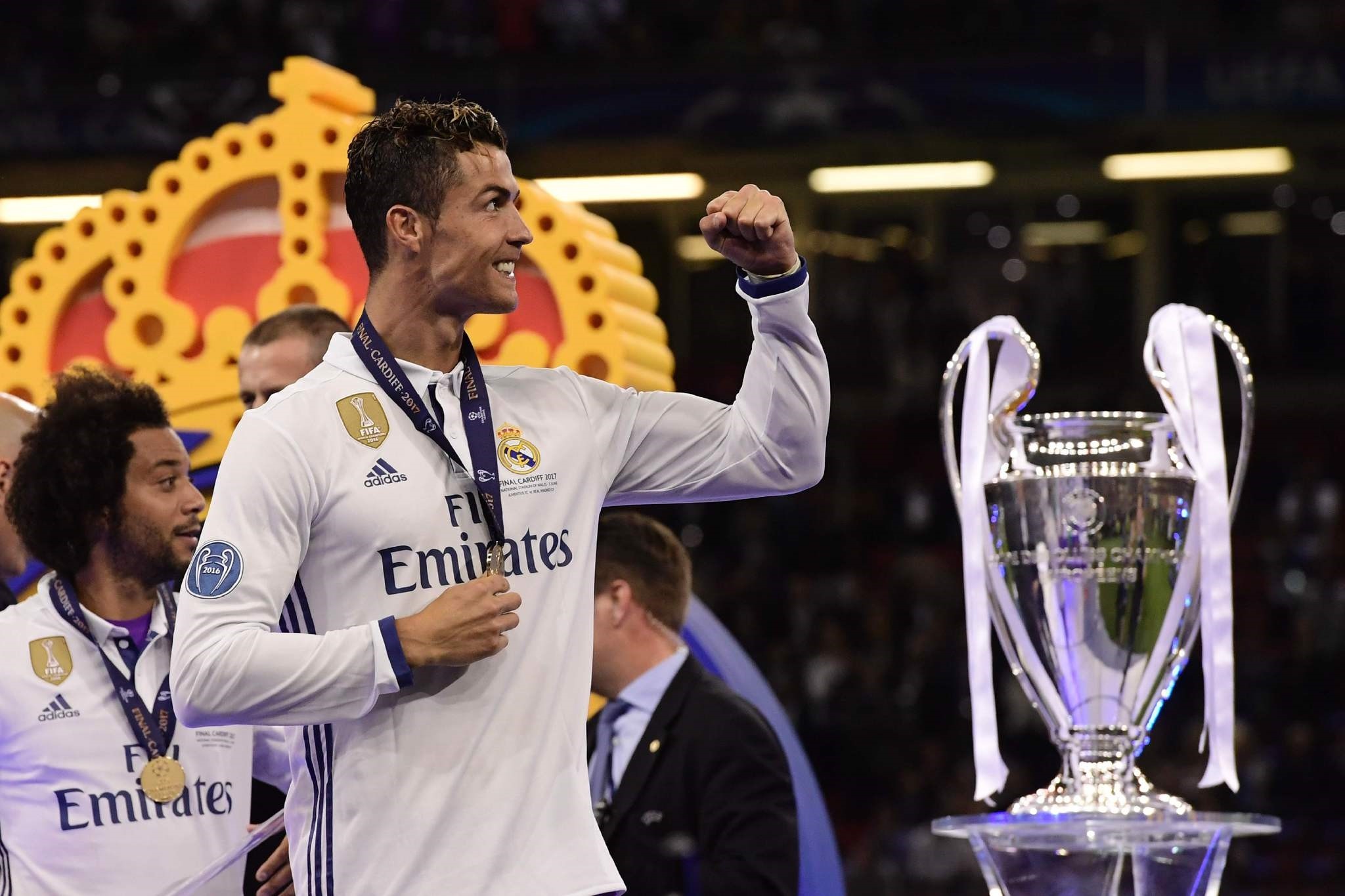 Ronaldo celebrates next to the trophy after Real Madrid won the UEFA Champions League final in Cardiff.
by Compiled from Wire Services Jun 05, 2017 12:00 am

Real Madrid's Portuguese star Cristiano Ronaldo's double in Saturday's final at Cardiff's Principality Stadium, allied to goals by Casemiro and Marco Asensio, earned him a fourth Champions League win and gave Madrid their third in four years and 12th in total. Ronaldo, 32, has now scored 600 career goals for club and country, including 105 in the Champions League, and has finished as the top scorer in the competition for the last five seasons.

"I think people don't have words to criticise, because the numbers don't lie," he told reporters after receiving the man-of-the-match award from his former Manchester United mentor Alex Ferguson.

"I'm very happy. It was an amazing season again. We won trophies. It's one of the best moments in my career. I have the opportunity to say that every year. But it's true.

"This year was amazing again, last year was amazing too. Now I have two or three days off to rest and after we have a (World Cup) qualifying game for Portugal and we have the Confederations Cup.

Madrid became the first team to defend the European Cup successfully since Arrigo Sacchi's AC Milan in 1990 and the first to achieve the feat since the competition relaunched as the Champions League in 1992.

"There's no doubt whatsoever, today is a truly historic day for Madrid's fans, myself and our big family," said coach Zinedine Zidane, who has now won four Champions Leagues as a player and coach.

"Having said that, you know how things are. Next year it's going to be even more difficult. We're going to have to work very hard to win once again.

"But today we can say that we are a very good team and that we deserved to win the league and the Champions League. It was not easy."

Zidane, 44, led Madrid to glory in last season's Champions League less than five months after succeeding Rafael Benitez to take up his first managerial role. The former France playmaker's contract expires in a year, but he said he was not thinking about leaving.

"I'm not going to confirm I'll stay here all my life. That's impossible to say," he said.

"But I'm extremely happy and I'm very grateful to the club for giving me the opportunity to coach these fantastic players.

"I have a one-year contract left. I think I'll be here next year!"

Meanwhile, real madrid President Florentino Perez said, "Zidane can stay at Real Madrid for the rest of his life." according to Reuters.

Juve have now lost five successive European Cup finals and a record seven in total. The Turin giants, Serie A and Coppa Italia winners this season, fielded a starting XI with an average age of 30 years and 336 days, but coach Massimiliano Allegri dismissed talk of decay.

"No, I don't think Juventus have reached the end of a cycle at all," he said.

"(Gianluigi) Buffon will still be the goalkeeper next year. The same applies to Andrea Barzagli, who will still be with us for at last another year. They've still got lots to give.

"If our current team is complemented with new players, we'll be really competitive in the Champions League next year."

Meanwhile, hundreds of Juventus soccer fans watching the Champions League final in one of Turin's main squares were injured when loud bangs created a panic and mayhem. About 400 people were being treated for slight injuries, Italian media reported. About five people were seriously hurt, including a 7-year-old boy who was trampled, Sky TG24 reported.