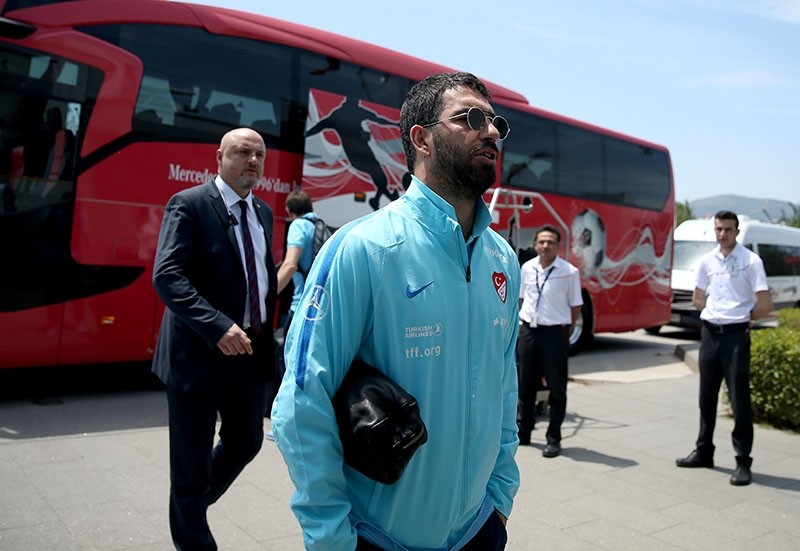 Turkish international and Barcelona midfielder Arda Turan ended his national football team career after being sacked from the Turkish national football team squad Tuesday by manager Fatih Terim upon verbally and physically assaulting a Turkish sports journalist on a plane that was carrying the national team from Macedonia's Skopje to Italy's Trieste late Monday.

Following the incident, Turkish Football Federation (TFF) President Yıldırım Demirören met with TFF's executive board members, and later spoke to Terim on the phone, who agreed that Turan remaining in the team's Slovenia camp was inconvenient.

Terim took disciplinary action against Turan and dropped him from the squad before a World Cup qualifier match is slated to take place against Kosovo on June 11. He is expected to leave the camp premises in the Slovenian town of Portoroz shortly.

"I hear them [several journalists] say that we did not write those stories. Yes, I know that you filled these [sports] pages by using somebody else's signature. I know what they had done. If I see any of those who did that, I don't know if I would give the exact same reaction but I would display the same anger," Turan said.

The incident took place on the night of an international friendly match between Macedonia and Turkey. Just before the plane took off from Skopje Monday, Turan reportedly approached daily Milliyet's Bilal Meşe, who was sitting nearby, and started shouting at him.

"Tell me Bilal Meşe, were you there? Were you with us when you wrote about the bonuses issue? Who did I ask for money from? Who did ask I for bonuses from? Talk. Come on. Who made you write those reports?" Turan reportedly shouted at Meşe, who has been in journalism for more than 40 years.

Turan was referring to stories widely reported in the Turkish media during the national team's troubled European Championships last year, during which Turkey failed to advance from its group with two losses in three games.

Reports suggested there was major disharmony in the team at the time, stemming from a rift between the squad, led by team captain Turan and coach Fatih Terim, and the Turkish Football Federation (TFF) over the amount of bonuses paid to players for participating in the championship.

"You thought I was like the others. Who did I beg for money from? You son of a b****. I'd quit football before allowing anyone to say anything against my honor, my family," he added.

He also blasted TFF officials and its president.

He then grabbed Meşe by the throat and was about to hit him when two other players, Burak Yılmaz and Caner Erkin, intervened.

While this incident was happening, coach Terim, who was reportedly sitting 12 rows away from the journalist's seat, reportedly did nothing to stop Turan.

Following the incident, the Barcelona midfielder shared a message on his Instagram account, saying: "Did I do right yesterday? I don't know!!!"
"Maybe not right, but at least honest, honorable, esteemed behavior … Did I get an answer? No … [He] filled up the pages for months, but in front of me he had no more than two words," Turan wrote.

The Association of Sports Writers of Turkey (TSYD) condemned Turan's assault on Meşe Wednesday, noting that Turan position the national team captain multiplied the severity of the attack.

After a brief training camp in Italy's Trieste and Slovenia, Turkey will face Kosovo in a World Cup qualifying stage match on June 11.