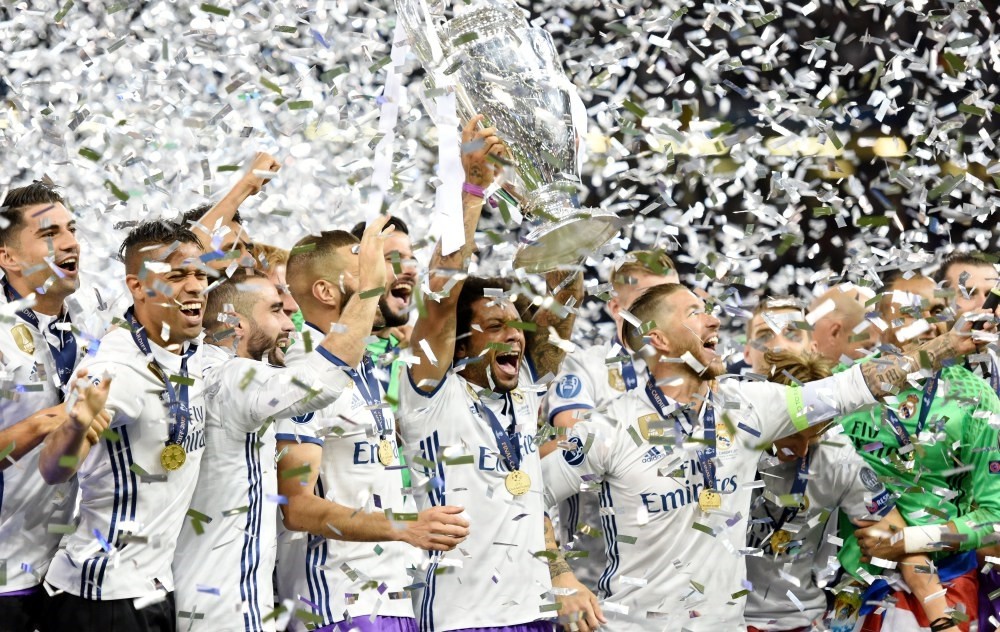 Real Madrid player Marcelo lifts the trophy after the UEFA Champions League final between Juventus FC and Real Madrid at the National Stadium of Wales in Cardiff.
by Daily Sabah Jun 07, 2017 12:00 am

After claiming yet another La Liga title and a record 12th Champions League victory, Real Madrid have overtaken Barcelona as football's most powerful brand. The club, however, still trails Manchester United in terms of brand value

With their superb double-winning season Real Madrid have eclipsed rivals Barcelona to become the world's most powerful football club brand, an annual study by valuation and strategy consultancy Bran Finance has revealed. In the study, which calculates the power and value of world's leading football club brands, Barca had remained just fractionally ahead of Real in recent years, until now. After claiming yet another La Liga title and a record 12th Champions League victory, the Los Blancos' Brand Strength Index score went up from 94.6 to 96.1, edging ahead of Barcelona's 95.4.

However, despite being football's most powerful brand, in terms of brand value, Real still trail Manchester United by a considerable margin. United, despite finishing a disappointing sixth in the Premier League, are the most valuable brand in football, worth $1.733 billion to Real's $1.419 billion.

Real could perform significantly better in growth markets outside Europe too. In some, such as the Middle East, Real is popular, yet Brand Finance research into the vast and therefore critical Chinese market demonstrates that Real have a lot of work to do; they lag behind not just United but also Bayern Munich in popularity.

David Haigh, CEO of Brand Finance, commented, "Real must now pay careful attention to its off-pitch strategy as it does to its on-pitch performance. Newfound status as the world's most powerful brand ought to provide the club with ammunition in ongoing discussions with Emirates to renegotiate the shirt sponsorship; Real must not miss the opportunity."

Premier League clubs continue to lead the world when it comes to commercializing their brands; six of the top ten most valuable football brands are English. Title rivals Chelsea and Tottenham have recorded some of the biggest gains this year after successful seasons that saw Chelsea regain their status as England's best, under dynamic new manager Antonio Conte.

Tottenham are also expanding its home; the new White Hart Lane has been innovatively designed and will offer 61,000 spectators the opportunity to see Spurs on home turf. The Spurs brand value was up 58 percent last year and Chelsea's 61 percent to reach $1.248 billion.

All Premier League teams continue to benefit from the vast revenues brought in by the latest broadcasting rights deal with Sky and BT. The relatively equitable split is particularly helpful to smaller clubs and helps to explain how a club such as Bournemouth (which joined the Premier League just two years ago and come from a town of just 180,000 inhabitants) can control a more valuable brand than much longer established European top tier clubs such as Olympique Lyonnais, Inter Milan, and AS Roma.

Juventus' Serie A win and full Champions League run helped improve brand strength by three points, putting the Italian club in the top five for brand strength. Bayern Munich have stayed level in fifth with the Bundesliga title increasingly coming to seem theirs by right.

Meanwhile, Zenit St. Petersburg are Russia's only entry in the top 50. Its 168 million euros commercial revenues (led by headline sponsor Gazprom) are the primary driver of brand value, putting it significantly ahead of the two major Moscow clubs CSKA and Spartak.