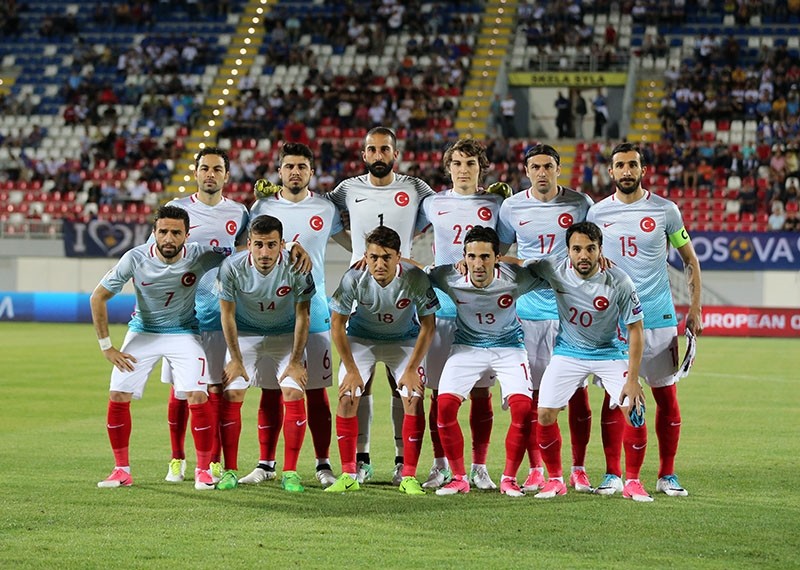 With a 4-1 win over Kosovo on Sunday, Turkey extended their unbeaten run to five. Meanwhile, Burak Yılmaz, who netted the third goal for his team, took his tally to 23 to claim the second position in Turkey’s all-time top scorers’ list

With the win, the national team extended their unbeaten run to five.

All four goals came from different players, as Turkey picked up three valuable points at the Loro Borici Stadium.

The first half was a little shaky for the Turkish side, as the team was still dealing with a break-up after Arda Turan announced his retirement from international football on Tuesday in the wake of an assault on a journalist.

Fenerbahçe player Volkan Şen opened the score sheet in the 7th minute, but Kosovo managed to equalize in the 22nd minute with a header from a corner kick.

Medipol Başakşehir's Cengiz Ünder, answered with his own header nine minutes later to give his team the lead before going into the half-time break.

Turkey, however, were in full control of the second half, as striker Burak Yılmaz scored in 61st minute and Ozan Tufan added the final goal in the 82nd minute.

It was Burak Yılmaz's 23rd goal in national colors and it saw him go past Tuncay Şanlı to become Turkey's second most goal scorer of all time.

Meanwhile, Trabzonspor's young star Yusuf Yazıcı made his debut in the match.

However, discussions over Arda Turan, rather than the match result, dominated the post-match presser.

Earlier on June 6, Turkey coach Fatih Terim axed the Barcelona star from the national squad after he allegedly attacked a sports journalist on a plane carrying the Turkish national side. Turan reportedly approached Bilal Meşe of the Turkish daily Milliyet and started hurling insults at him.

The dispute stemmed from allegations Meşe made saying that the reason for Turkey's poor performance at the European Championships last year, in which Turkey lost two out of their three group stage games, stemmed from a dispute between the squad and the Turkish Football Federation over player bonuses.

"Yes some things happened in 2016. But, it was not just about bonuses. Some footballers came late to training sessions, did not pose for team photos, a lot of things happened. Undoubtedly, the players are important; they are great players, no doubt. But, the disciplinary principles are also important and being mature is much more important," Terim said.

"Who is advocating who, who is defending the mistakes that were made and who is benefiting from what? One must pay attention to these matters. Yes, something [Arda Turan's outburst] like this happened. It deserves a red card. You can't stay on the pitch after you are shown a red card. I thought we could at least save the future [by dismissing Arda Turan from camp]," he added.

However, Terim avoided mentioning Arda directly during the press conference.

About the match against Kosovo, Terim said, "Kosovo is a team who plays very aggressively on their home turf. We controlled the game, but even though we took the lead, we conceded an unexpected goal. And pulled ourselves together and dominated the game in the second half."

With the win, Turkey remain third in Group I and have bagged 11 points to date.

Elsewhere in Group I, Euro 2016 upstarts Iceland produced another memorable win Sunday as they beat Croatia with a last-minute goal to go level on points with their opponents at the top.

Croatia and Iceland both have 13 points from six games, although the Croatians have a better goal difference. The pair are two points ahead of Turkey and Ukraine, who were 2-1 winners in Finland, in an increasingly tense group.

The group's winner qualifies directly for the World Cup next year. The eight best runners-up in the nine European groups go into a playoff round with the winners of the four ties also going to Russia.