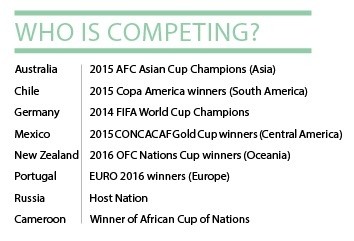 The eight-team tournament, considered a test run for FIFA's more prestigious World Cup in Russia next year, begins with the hosts squaring off against New Zealand in St. Petersburg

Russia is gearing up to host the Confederations Cup, the dress rehearsal for next year's FIFA World Cup, from June 17 to July 2. The tournament will test the country's ability ahead of the mega event.

"The team's recent matches show that we have some potential," Putin said in comments carried by state news agency TASS.

The eight-team tournament, considered a test run for FIFA's more prestigious World Cup which takes place in Russia next year, begins with the hosts squaring off against New Zealand in St. Petersburg Saturday.

"Let us hope that the guys will try to perform well, like real fighters," Putin said.

National coach Stanislav Cherchesov, however, was less optimistic in an interview last week with the DPA.

"We are the absolute outsiders among the eight teams," Cherchesov said. "We are the only team at the Confed Cup that has not won any other tournament to qualify, but we will do our best."

Cherchesov hinted that world champions Germany or European champions Portugal were clear favorites for the Confederations Cup, which brings together the World Cup winners, continental championship winners and the next World Cup hosts.

Russia, who are ranked 63rd in FIFA's global rankings, have been plagued with injuries and at least five players have been ruled out of the tournament. The poor outlook appears to not have hindered Russian fans' enthusiasm for the tournament. Last month, Deputy Prime Minister Vitaly Mutko, responsible for sport in the country, said that Russians had purchased 90 percent of the tickets sold. In total, about 70 percent of the 700,000 tickets for the tournament have been sold, the Russian organizing committee's head, Alexei Sorokin, said this week. He described that number as usual for such a tournament.

"As far as the Confederations Cup is concerned, tickets are never sold out. In our case, tickets for matches involving Russia are in the highest demand," Sorokin said in comments carried by TASS.

Foreign fans coming to Russia for the tournament are being allowed to enter the country without a visa and can stay for 10 days after the final on July 2, if they would like to tour host cities Moscow, St Petersburg, Sochi and Kazan.

The four host cities will also hold World Cup matches June next year along with seven other venues. Russia has been building and modernizing stadiums for the World Cup, with a budget of about $11 billion.

Cristiano Ronaldo provides star quality at the Confederations Cup. Real Madrid forwardwants to leave the club and Spain after being accused of committing tax fraud in the country, a report in Portuguese sports daily A Bola said on Friday. The newspaper said its story was based on a reliable source and that the 32-year-old four-times world player of the year had already made up his mind to ask the club for a transfer.