Stars over 30 flock to Turkey in off-season transfers 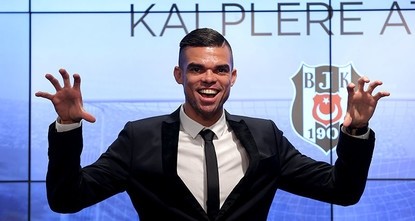 With the summer transfer window open, Turkish Super League teams are scrambling to secure their international signings. But, with the exception of a few young footballers, most stars making their way to Turkey, from European clubs, are all aged above 30, including the likes of Pepe and Gael Clichy, who have dominated headlines with their massive transfer fees

Turkish football clubs have had a busy off-season so far, working to keep up with the European transfer market and amid a flurry of transfers, French international Gael Clichy and Real Madrid's Portuguese defender Pepe made headlines after both moved to Turkey for massive transfer fees despite their age.

Clichy has been a free agent since June after a lackluster streak of only 30 league appearances in the last two seasons. The Başakşehir move has brought his fourteen-year-old English Premier League career to an end.

Talking to media, the French international said that he believed he made the right decisions by moving to Başakşehir's "project".

"Başakşehir are a club on the up. They missed on winning the cup last season in the last minutes of the final. I have played with the likes of Viera and Henry in England and helped teams win titles. When I met Başakşehir executives, I felt I was in the right place. It is like a smaller Manchester City and they have every means to success. They have picked the right players for the job and they are taking risks," he said.

He said it would be a major change for him to move to Turkey, after fourteen years in England.

"This is a big adventure and I hope it will continue more than three years," he said.

"Galatasaray were more interested. But, I saw how Başakşehir was eager to take me in when all their executives came to meet me ahead of the negotiations and I made my mind," he said.

Başakşehir, after finishing last season in the second-place, will try to grab a Champions League group stage spot next season.

They have also signed up 30-year-old left-winger Eljero Elia from Feyenoord.

In the meantime, big European clubs, including Manchester City, are knocking on Başakşehir's door for their wonder kid Cengiz Ünder, who had a breakout season and managed to be a regular on the Turkish national squad.

Fenerbahçe's archrivals Galatasaray have also made some significant changes after a below-par season.