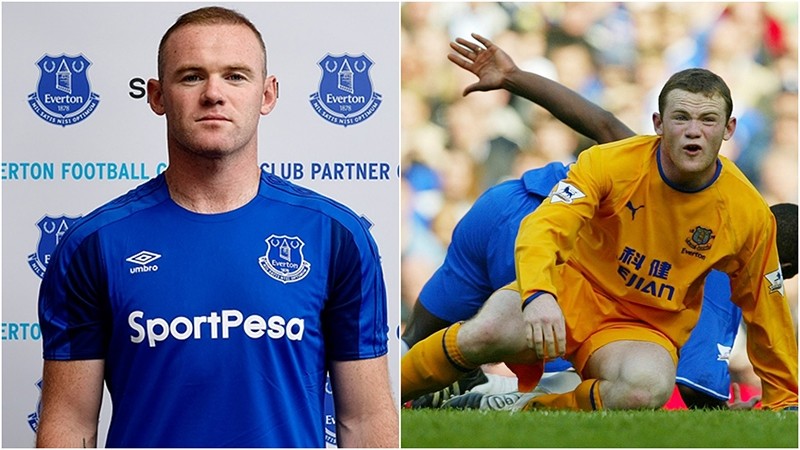 England and Manchester United's record goalscorer Wayne Rooney declared himself 'ecstatic' after completing a move back to Everton, the club where he first starred as a teenager, on Sunday.

The 31-year-old -- who became a peripheral figure under Jose Mourinho last season -- signed a two-year contract on a free transfer, according to the BBC, bringing the curtain down on 13 trophy-laden years at Old Trafford.

Rooney -- whose move comes the day after United announced they had agreed terms with Everton over buying striker Romelu Lukaku -- will hope the switch revives his international career which also stalled last season.

"It is some time since I said that the only Premier League club I would play for other than Manchester United was Everton, so I am delighted that the move has happened," he said in a statement to the Press Association.

"Thirteen years ago I went to United with the intention of winning trophies and I have been fortunate to be a part of one of the most successful periods in the club's history.

"I have come back to Everton because I believe (Everton manager) Ronald Koeman is building a team that can win something and I look forward to playing my part in making that a reality for the club I have supported since a boy," added Rooney, who was five times United's leading scorer and on another occasion shared the honours with Cristiano Ronaldo.

"I didn't want to play for another club in England other than Everton."

Indeed Rooney said once he met with Koeman he knew there should be no other destination for his talents.

"I saw it in his eyes that he wanted me to be part of his team," said Rooney.

Koeman said in Rooney -- who in his time at United won among other trophies five Premier League titles and a Champions League -- he was buying a player with a surefire winner's mentality.

"Wayne has shown me that ambition that we need and that winning mentality -- he knows how to win titles and I'm really happy he's decided to come home," said Koeman.

"He loves Everton and he was desperate to come back. He is still only 31 and I don't have any doubts about his qualities. It's fantastic he's here."

Mourinho for his part said he admired Rooney but understood both his desire for playing more football and to return to the club that nurtured his talent.

"It is never easy to see a great player playing less football than he would like and I could not stand in his way when he asked to go back to Everton," said Mourinho.

"Wayne has been a fantastic servant to United since the moment he signed for us as a prodigiously talented, explosive teenager some 13 seasons ago," said Woodward.

"Who can forget his storybook debut hat-trick against Fenerbahce, the spectacular overhead kick against (Manchester) City and the countless match-winning performances in his time here?

"But after much discussion, the club has decided to accept his request to rejoin his boyhood team.

Rooney, who had at one point been linked with a move to China before interest cooled, largely had a season to forget last year.

He made just 15 Premier League starts -- and came on in another 10 -- and was a non-used substitute in the League Cup win over Southampton and was sent on in the 90th minute of the 2-0 victory over Ajax in the Europa League final.

He first burst onto the scene aged just 16 at Everton and went on to score 17 goals in 77 appearances for the 'Toffees', sparking then United manager Alex Ferguson's interest.

Ferguson managed to persuade the board to splash out £27 million (30.7m euros, $35m) and the club was not to regret their investment.

But he fell out of favour with manager Jose Mourinho last season and made just 25 league appearances with five five goals.

"It is never easy to see a great player playing less football than he would like and I could not stand in his way when he asked to go back to Everton," Mourinho said on the club's website.

"His experience, focus and determination will be missed and I wish him well for the future."

He said he was excited by the direction the club is headed and that winning silverware with the Toffees would be the "pinnacle."

"I really feel now the club is moving in the right direction, bringing the right calibre of players in," he added.

"I want to be part of it and hopefully part of a successful Everton team. This club is moving forward.

"This football club should be winning trophies and we're taking huge steps to being involved and trying to win trophies."