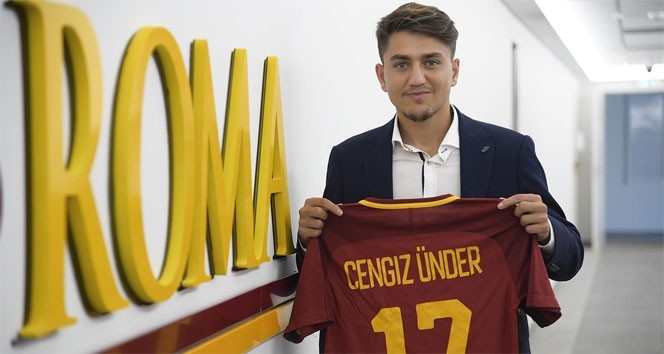 Twenty-year-old Cengiz Ünder completed a move to Italian Serie A club Roma yesterday for what his club Medipol Başakşehir touted as ‘a record fee' of 13.4 million euros

Turkish wunderkind Cengiz Ünder of Medipol Başakşehir became the most expensive transfer to a European club from Turkey according to what his Istanbul-based club said.

Ünder signed for a five-year deal with Italian Serie A club Roma yesterday to the tune of 13.4 million euros and he will be entitled to an additional 1.5 million euro bonus.

The twenty-year-old midfielder, who rose to prominence with his performance in Başakşehir and Turkish national team, will wear the number 17 jersey for Roma.

In an interview published on Roma's website Ünder said he was delighted to be in Italy and excited about meeting the fans.

"I am a team player with good technique, pace and dribbling ability. I think what I can improve most is the physical side of my game," he said.

Ünder said he was also very excited about "the possibility of playing in the Champions League" and would "love to be able to play against Başakşehir in Europe."

Başakşehir, after finishing last season in the second-place, will battle to grab a Champions League group stage spot next season.

Ünder said Roma's sporting director Monchi has discovered lots of fantastic players in the past and he was very happy that he wanted him in Roma.

"My aim is to earn myself a regular starting spot as quickly as possible. I am very competitive and I want to show people at my new club what I'm all about," he said.

The Turkish international is expected to join the team in the coming days after securing a visa while the Italian team left for United States yesterday for pre-season training session.

Manchester City and Roma were battling for Ünder, who joined Super League runner-ups Başakşehir for a mere 850,000 euros from first division side Altınordu.

Earlier, Başakşehir officials said that though many European clubs were interested in Ünder they decided to negotiate with Manchester and Roma only.

Ünder rose to prominence last season when he scored seven goals in 32 appearances for his club. He scored his first goal for the Turkish national team against Moldova in March.

Football pundits have likened Ünder to Juventus's 23-year-old Argentine forward Paulo Dybala, both in appearance and rapid rise to fame as talented players.

According to Doğan News Agency, Turkish clubs have so far earned some 64.7 million euros from transferring out players to European clubs, but Ünder will be the most expensive one.