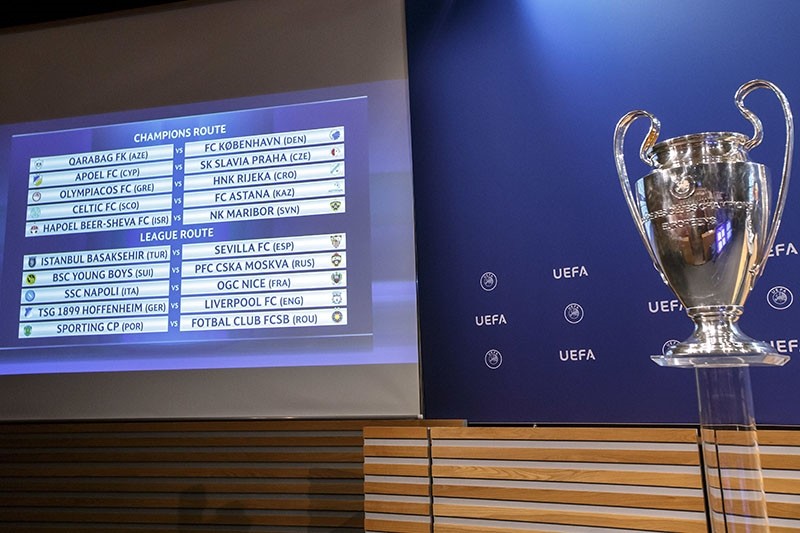 The group formations are shown on an electronic panel next to the Champions League trophy, after the drawing of the games for the Champions League 2017/18 play-off matches at the UEFA headquarters in Nyon, Switzerland, Aug. 4, 2017. (AP Photo)
by Daily Sabah with AA Aug 04, 2017 12:00 am

Turkey's Medipol Başakşehir will play against Spanish powerhouse Sevilla in the Champions League playoff round, according to the draw held Friday at the UEFA headquarters in Switzerland's Nyon.

The two clubs will play their first match on Aug. 15-16 in Istanbul, while the return match will be played in Sevilla on Aug. 22-23.

Başakşehir, last year's runners-up in the Turkish Super League, will advance to the group stage in top tier of European football if they manage to overcome their strong opponents.

Başakşehir knocked out Belgium's Club Brugge in the previous round last Wednesday through a 2-0 win in Istanbul and 5-3 on aggregate.

Başakşehir has made several signings over the summer, adding Eljero Elia from Feyenoord, Aurelien Chedjou from Galatasaray, Mevlüt Erdinç from Hannover, Gael Clichy from Manchester City, Tunay Torun from Kasımpaşa and Gökhan İnler from Beşiktaş.

They have also recently signed Kerim Frei from Birmingham City and Manuel da Costa from Olympiakos.

Sevilla have added defender Simon Kjaer from Fenerbahçe on a fee of 12.5 million euros ($15 million).

The second team representing Turkey in the Champions League, last year's champions Beşiktaş, will directly participate to the tournament from the group stage.

Here are all the draw results according to the new format: