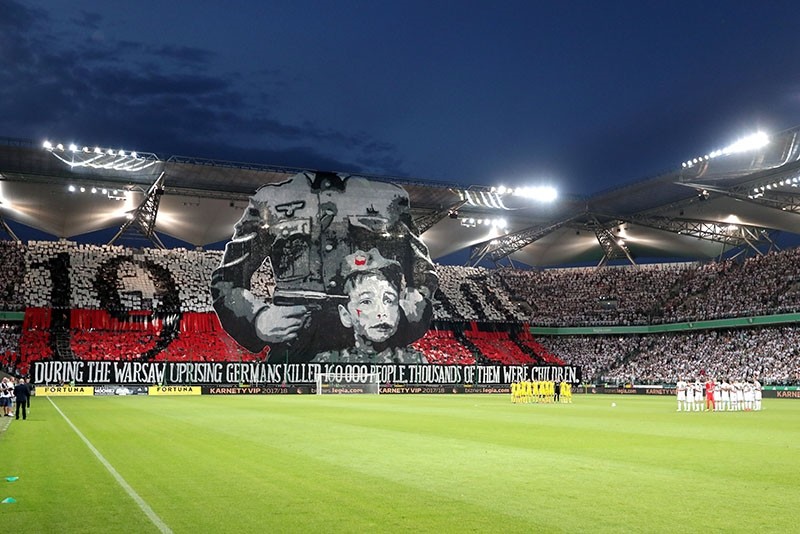 Legia Warsaw's supporters before the UEFA Champions League 3rd qualifying round 2nd leg match between Legia Warsaw and FC Astana, during the 73rd anniversary of the Warsaw Uprising, at Legia stadium in Warsaw, Poland, Aug. 2, 2017. (EPA Photo)
by Associated Press Aug 04, 2017 12:00 am

Legia fans displayed the banner, which was the width of an entire stand, during Wednesday's Champions League qualifier against Kazakh team FC Astana.

It marked the Warsaw Uprising of 1944, when Polish resistance fighters captured large parts of the capital city but were eventually crushed by occupying German forces.

"During the Warsaw Uprising Germans killed 160,000 people. Thousands of them were children," the banner read, below a picture of a German soldier with a gun to the head of a child.

UEFA, which often punishes clubs for political symbols at games, said Legia faces a disciplinary charge relating to the "illicit banner" and another because stairways at its stadium were blocked.

Legia could face a heavy fine because it's been punished by UEFA several times before over fan violence and, on one occasion, a giant banner which claimed UEFA put money ahead of football.

Legia was beaten 3-2 on aggregate by Astana and eliminated from Champions League qualifying. Its next European game is a Europa League qualifier against Moldovan team Sheriff Tiraspol.