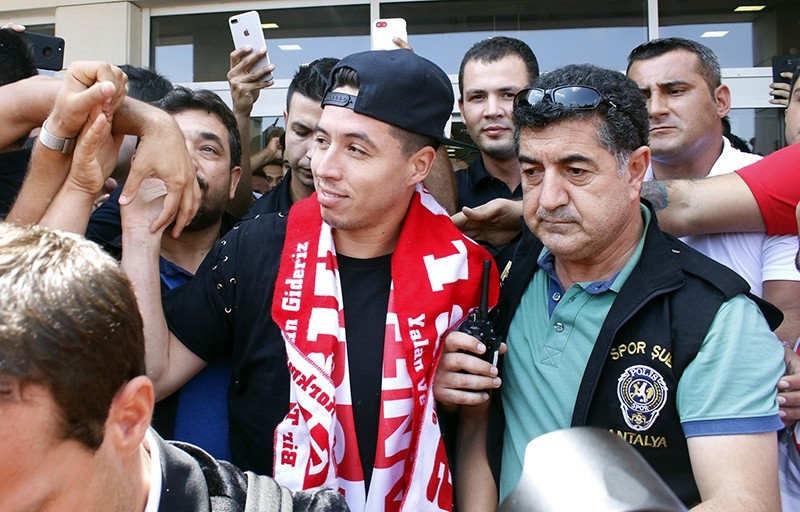 Draped in an Antalyaspor scarf, former French international Samir Nasri arrives in Antalya, Turkey to finalize his move to the Turkish side, Aug. 20, 2017. (IHA Photo)
by French Press Agency - AFP Aug 21, 2017 12:00 am

"After talks with Samir Nasri and the club, a two year deal has been signed," Antalyaspor said in a brief statement headlined "Welcome Samir Nasri" without disclosing financial details.

Nasri, who spent last season on loan at Sevilla and appeared unlikely to figure in Pep Guardiola's plans this season, was met at Antalya's airport by crowds of fans Sunday, images showed.

Draped in an Antalyaspor scarf, he was guided through the dense crush of supporters into a vehicle by the local security forces.

Nasri, 30, will earn an annual salary of four million euros ($4.7 million) plus bonuses at the club in Turkey's Mediterranean resort city, the NTV Spor website said.

On his Instagram page, the player posted a picture of him grinning broadly and making a victory sign as he boarded a private jet, with no comment except two aircraft icons to show he was traveling and a "..." to show an announcement was expected.

Nasri joined Manchester City in 2011 after three seasons at Arsenal, emerging as one of their key players before falling out of favour. He has since also bowed out of international football.

Guardiola had been expected to offload Nasri this summer although he did take the volatile Frenchman on a pre-season trip to the United States.

Antalyaspor are one of Turkey's most ambitious sides, despite only winning promotion to the Super Lig in 2015, and want to break the league domination of the Istanbul giants.

They were disappointed to finish the 2015-16 season in ninth place but improved to fifth place last term, just missing out on a spot in the Europa League.

Antalyaspor's key player over the past couple seasons has been former Cameroon international striker Samuel Eto'o, who remains at the club despite persistent rumors he is unsettled.

Antalyaspor got off to a slow start in the first game of the season, losing 2-0 away to champions Beşiktaş, and will be looking to make amends late Sunday when they host Akhisarspor.