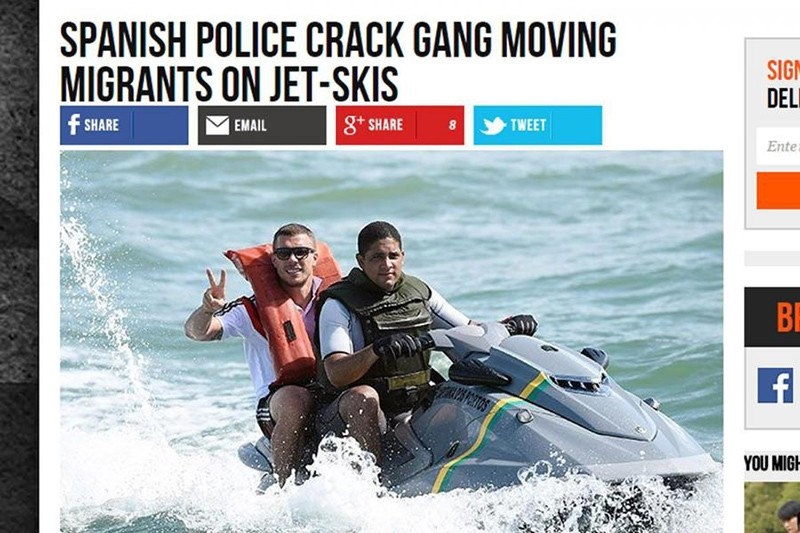 U.S. far-right news and opinion website Breitbart News had to apologize Sunday after mistaking German football star Lukas Podolski for a migrant being smuggled from Morocco to Spain.

Breitbart, which has recently welcomed back now former White House chief strategist Steve Bannon as executive chairman, used a photo of the former Galatasaray striker on a jet-ski with a story titled 'Spanish Police Crack Gang Moving Migrants on Jet-Skis.' The story detailed how Spanish police had shut down a gang charging migrants 5,000 euros each to bring them across from Morocco via the Strait of Gibraltar on jet-skis.

The picture in question was taken during 2014 FIFA World Cup when the German national team, who won that tournament, was enjoying a day off.

The story, particularly its grabbing headline and photo, drew a lot of attention among Internet users worldwide, who repeatedly pointed out Breitbart's mistake.

Only after the story was widely shared on social media, and readers began to ridicule Breitbart for the mistake, the website changed the photo, and apologized to Podolski.

"A previous version of this story included an image of Lukas Podolski on a jet ski. This image appeared as an illustration of a person on a jet ski. Breitbart London wishes to apologize to Mr. Podolski," an editor's note under the story said.

The note added that there was "no evidence Mr. Podolski is either a migrant gang member, nor being human trafficked."