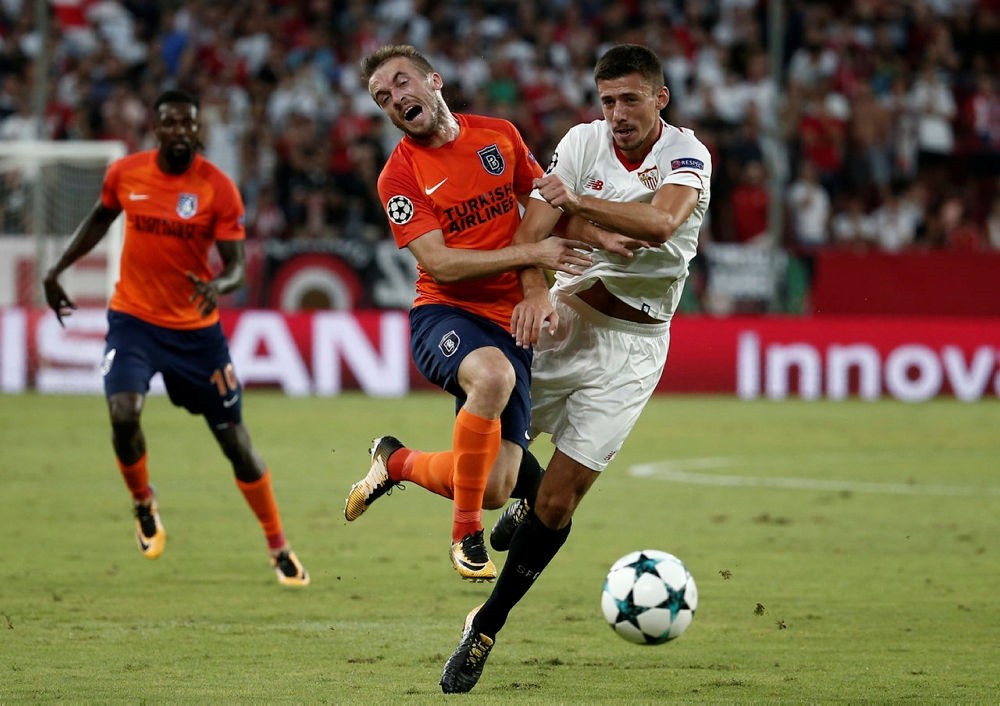 After a neck to neck battle with Sevilla, Medipol Başakşehir were denied by the woodworks from making it to the UEFA Champions League group stages and will now continue their European campaign in the Europa League

Turkish football fans were on the edge of their seats Tueday night as they watched minnows Medipol Başakşehir come so close to qualifying for the UEFA Champions League groups stages only to be denied by the woodwork.

European veterans Sevilla eliminated the Istanbul side on a 4-3 aggregate after Başakşehir midfielder Emre Belözoğlu's 90th-minute free kick hit the woodwork, costing the club what would have been a memorable away victory at the Ramon Sanchez Pizjuan stadium.

Başakşehir started the match at a fast pace, finding the net in the 17th minute through first-leg scorer Eljero Elia. The Dutch winger slid in Junior Caicara's low ball to give Başakşehir the lead.

The second half was to be a different story, as Sevilla equalized and gained the upper hand when Sergio Escuredo brushed aside his marker to score a header in the 52nd minute.

The La Liga side then took a commanding lead in the 75th minute with Wissam Ben Yedder's low driven shot beating Başakşehir goalkeeper Volkan Babacan after a counter-attack.

Başakşehir increased their tempo in the last 10 minutes before Edin Visca restored the Istanbul club's morale when he crashed home a powerful shot in the 82nd minute.

But Başakşehir's last-minute heroics were not enough as Sevilla managed to draw 2-2 and move on to the group stages. The Istanbul outfit will now continue their European campaign in the UEFA Europa League. Both competitions' draws will be made in Monaco today.

After the match, Başakşehir coach Abdullah Avcı said: "If only Emre's free kick went in we would have made history. The game we played satisfied me as well as the spectators, who gave us a standing ovation. The way we played in Europe showed us how we can dream big. We have earned valuable experience for the future."

Sevilla coach Eduardo Berizzo said: "Luckily for us, Emre's shot did not go in. This is life, this is football. Today we got the last smile. We have eliminated a very good and difficult team."

Third in Serie A last season, Napoli were too strong for Nice, winning 2-0 in France with Callejon and Lorenzo Insigne both scoring as they progressed 4-0 on aggregate.

Nice, for whom recent signing Wesley Sneijder started, were thoroughly outplayed over the two legs and will have to settle for a place in the group stage of the Europa League instead.

Meanwhile, Celtic went through 8-4 on aggregate despite losing 4-3 to Astana in the second leg of their playoff in Kazakhstan as a second-half wobble gave their hosts hope of pulling off a miraculous recovery.

Brendan Rodgers' side had won 5-0 in the first leg in Glasgow and a super Scott Sinclair strike in the 34th minute should have killed the tie. But Olivier Ntcham ended Astana's hopes when his deflected strike made it 4-2 on the night before Leigh Griffiths reduced the deficit further in the final minute.

"I have mixed emotions because we didn't defend well enough," Rodgers told BT Sport after a scare that brought back memories of the same stage 12 months ago.

Celtic beat Hapoel Beer-Sheva of Israel 5-2 at home in the first leg of the playoffs last year and then wobbled in the return, losing 2-0 to scrape through.

"We had our Beer-Sheva moment. I thought we were going to get through this campaign without the anxiety. The players were on the ropes for 15 or 20 minutes but then they regained composure."

Greek champions Olympiakos are also back in the group stages following a 1-0 victory away to Croatian champions Rijeka that took them through 3-1 on aggregate. German international Marko Marin scored the only goal on the night.

Maribor of Slovenia also progressed, beating Hapoel Beer-Sheva 1-0 with a Mitja Viler strike as they won the tie on away goals.

The remaining five ties were set for Wednesday with the highlight seeing Liverpool take a 2-1 lead into their playoff second leg against Hoffenheim at Anfield.

The draw for the Champions League group stages will be held in Monaco Thursday.