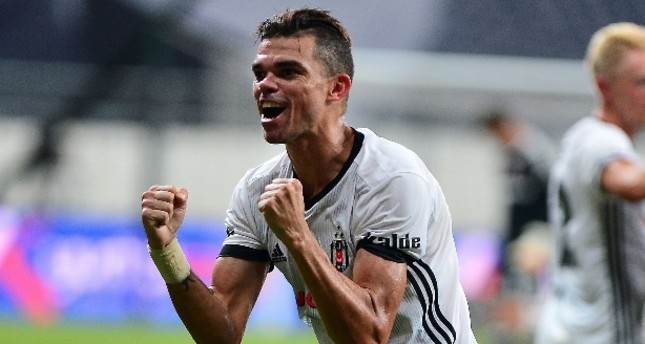 Pepe will be key in Beşiktaş’s Champions League campaign.

While holders Real Madrid will face Borussia Dortmund and five-time winners Barcelona were drawn with last season's runners-up Juventus, Beşiktaş will be happy to have avoided the big names in the Champions League group stages

Beşiktaş may have breathed a sigh of relief after the UEFA Champions League group stages draw Thursday pitted the Turkish champions against Monaco, Leipzig, and Porto in Group G, apparently avoiding a confrontation with the European heavyweights.

The group stages will kick off on Sept. 12 and Beşiktaş travel to Porto for their first tie on Sept. 13. However, their real test will be against RB Leipzig, who finished second in Bundesliga last season.

The Black Eagles fans, however, looked eager and ready for the competition as they took to social media site Twitter in support of their team. They used the hashtag #CometoBesiktas, to challenge rivals soon after the group stages draw was announced Thursday.

The Twitter battle escalated after Bayern Munich's official U.S. account tweeted "We were so ready to #ComeToBesiktas though..." which saw a flood of replies from Beşiktaş fans, eager to have a quarter finals face-off with the German side, pour into Bayern's stream.

Regarding the draw, Beşiktaş Chairman Fikret Orman said: "We are in a balanced group. These teams have equal strength. You can't say it was a bad draw. You know we are being observed by UEFA. If there's any incident in our home ground, we will be punished.

"We will not take our fans to the match in Leipzig. We request our fans in Germany not to get involved in any incident during the match or we will pay a high price."

As for the other groups, holders Real Madrid will face Borussia Dortmund and Tottenham Hotspur while five-time winners Barcelona were drawn with last season's runners-up Juventus.

Zinedine Zidane's side are chasing a third successive European title and fourth in five seasons after demolishing Italian champions Juventus 4-1 in Cardiff this June.

The record 12-time European champions also take on APOEL of Cyprus in a testing Group H that will see Gareth Bale face Spurs for the first time since leaving for Real in a then world record deal in 2013.

Barcelona beat Juventus 3-1 in the 2015 final but the Spanish club have endured a difficult month with Neymar departing for Paris Saint-Germain in a mammoth 222-million-euro deal. They will also come up against Greek champions Olympiakos and Sporting Lisbon in a competitive Group D.

Meanwhile, Bayern Munich coach Carlo Ancelotti will return to Paris in a Group B that also features Celtic and Anderlecht.

Chelsea, one of a record five English teams to qualify for the group phase, will meet Atletico Madrid in Group C as well as Roma and Qarabağ, the first side from Azerbaijan to reach this stage of the competition.

Jose Mourinho will visit his native Portugal with Manchester United after they were placed in Group A with Benfica, CSKA Moscow, and Basel. Pep Guardiola's Manchester City are in Group F alongside Shakhtar Donetsk, Napoli, and Feyenoord while Liverpool will play Spartak Moscow, Sevilla and Maribor in Group E.

The opening round of matches will be played on Sept. 12-13.

Share on Facebook Share on Twitter
Previous in Football The European arena has not been fruitful for Turkish teams of late,... Next in Football Medipol Başakşehir's bid for a first Europa League title continues...
DAILY SABAH RECOMMENDS