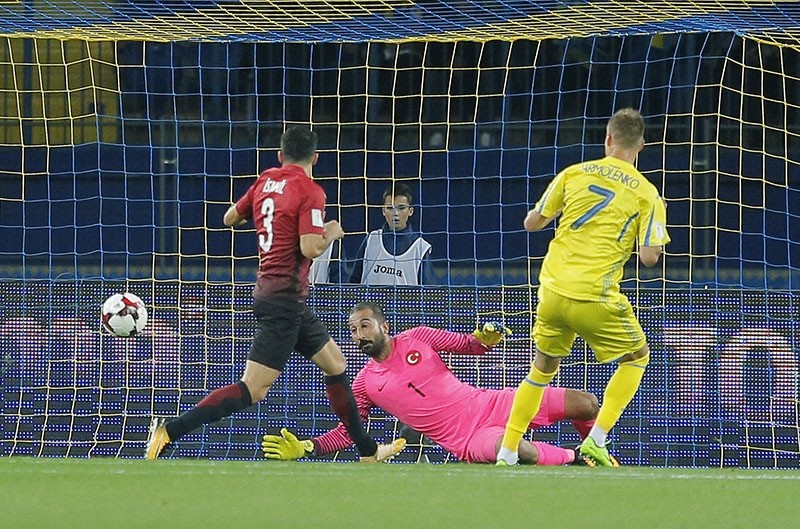 Ukraine's Andriy Yarmolenko scores his side's first goal during the World Cup Group I qualifying soccer match between Ukraine and Turkey at the Metalist Stadium in Kharkiv, Ukraine, Saturday, Sept. 2, 2017. (AP Photo)
by Compiled from Wire Services Sep 03, 2017 12:00 am

Andriy Yarmolenko celebrated his 70th international appearance with two first-half goals to move Ukraine to the top of Group I with a 2-0 victory over Turkey on Saturday in World Cup qualifying.

Despite trailing leaders Croatia and Iceland by two points before the match on Saturday, Ukraine tops the group after Finland beat Iceland 1-0, and Croatia's game against Kosovo was postponed due to a torrential downpour.

With three more games to play, Ukraine has 14 points while Croatia and Iceland are one point behind. Turkey is three points back on 11.

Yarmolenko, who moved from Dynamo Kiev to Borussia Dortmund this week, opened the scoring in the 18th minute with his 30th international goal and added his second three minutes before the break after his teammate Yevhen Konoplyanka's quick move down the right flank.

Whereas Turkey, in their first appearance with Romanian coach Mircea Lucescu, displayed a poor performance.

In what is the tightest European group, Ukraine is heading to Iceland on Tuesday, while Turkey hosts Croatia.

The game between Croatia and Kosovo in Zagreb was suspended midway through the first half due to heavy rain, forcing players to leave the field. Later on, it was abandoned due to adverse weather conditions and postponed till Sunday.

Finland handed an upset 1-0 defeat to Iceland to win its first match in the 2018 World Cup qualifying campaign.

Finland earned just a single point from the previous six qualifiers — a draw against Kosovo — while Iceland kept momentum from its inspiring run to the Euro 2016 quarterfinals to lead Group I with Croatia.

But Finland did everything right this time.

First, Alexander Ring netted a free kick nine minutes into the game, and then the Finnish defense held firm to frustrate Iceland.