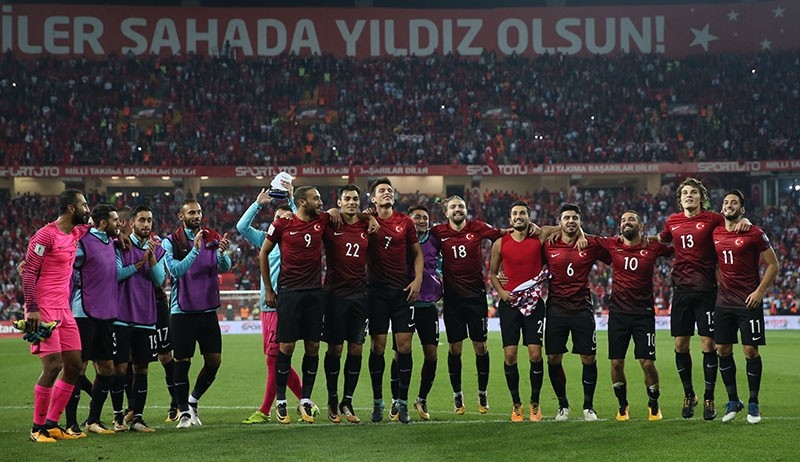 A 1-0 win over the group leaders Croatia have revived the Crescent-Stars' prospects of qualifying for the 2018 World Cup. The match blew the group open with just two games left to play

Turkey who were battling to stake its place in the qualifiers, kept their dreams alive, as they defeated Croatia 1-0 in their 2018 FIFA World Cup Qualifier Group I match Tuesday.

The Crescent-Stars' prospects had been dented earlier Saturday when they lost 2-0 to Ukraine but they were back in contention in front of a raucous 30,000-strong home crowd in the northwestern Turkey's Eskişehir on Tuesday night.

They managed to oust Croatia, thanks to a follow-up goal from striker Cenk Tosun in the 75th minute, after Oğuzhan Özyakup's long-range shot was denied. Croatia was dangerous in the first half when a shot by the visiting team was denied by the woodwork.

Before the match, Turkey had never beaten Croatia in a 90-minute match. Turkey's record was five draws and three losses to Croatia. The most memorable previous bout with Croatia was back in Euro 2008 when Turkey won to advance to the semifinals in a penalty shootout.

Turkey's win blew Group I wide open in European qualifying for next year's World Cup. The top four teams are separated by just two points with two games left. Group leader Croatia and Iceland have 16 points each, while Turkey and Ukraine are both just two points behind.

Turkey coach Mircea Lucescu said: "I congratulate the footballers. They played very well and cleverly. They played passionate and organized football. They did not make any mistakes in finding a goal as they did with Ukraine. Now the most important target for us is to win against Iceland. A victory calls for another victory. We have to win or else this win will have no meaning. You will see a much better team next month."

Critical of the referring Croatian coach Ante Cacic said: "Turkey deserved to win. But throughout the 90 minutes, we controlled the game. We played better football. We just could not concentrate well. The referee did not award a clear penalty. Last week Lucescu was complaining about the referee but this time we did not get a clear penalty."

Croatian Football Federation's Chairman and former football star Davor Suker said: "We were going to finish the qualifying round on top, but now it will be a success if we can go to World Cup 2018. We did not deserve to win tonight's game. I congratulate Turkey. Now the group is wide open to surprises. From now on every team have to get three points in the remaining two games in order to secure their place."

Meanwhile, Croatian star Luka Modric said: "We didn't deserve to win. These can happen in football. We have to win the last two remaining matches to qualify. So I am very sorry to lose the game."

In the other Group I matches, Iceland got back on track with a 2-0 win over Ukraine while Finland beat Kosovo 1-0.

Iceland's Gylfi Sigurdsson scored from a rebound two minutes into the second half and added his second goal in the 66th minute to ensure his team stays in contention for a World Cup berth.

Iceland had been keeping the momentum going from its inspiring run to the Euro 2016 quarterfinals until its progress was checked by a 1-0 loss to Finland Saturday. But the two goals by midfielder Sigurdsson turned things around for the small nation. In its final two games in October, Iceland travels to Turkey and hosts Kosovo.

Teemu Pukki netted seven minutes before the end for Finland, handing Kosovo its seventh straight defeat in its first major qualifying competition, in a match between the two bottom teams.

After its second straight victory, Finland has seven points, while Kosovo has one. The match was played in Albania as Kosovo do not have a FIFA-certified stadium.