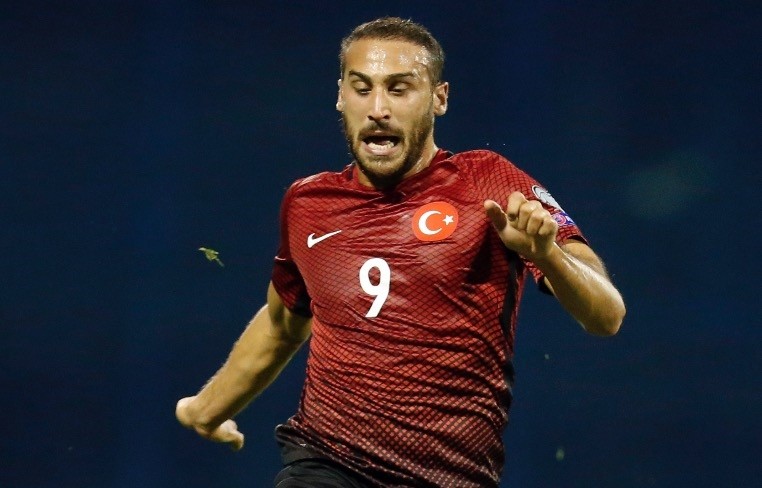 Cenk Tosun is challenged by Croatiau2019s Domagoj Vida during the World Cup Group I qualifying match between Croatia and Turkey, at Maksimir stadium in Zagreb, on Sept. 5, 2016.
by Daily Sabah with AFP Sep 05, 2017 12:00 am

Disappointed and wounded after the thrashing in Ukraine on Saturday, Turkey will be seeking to get back their self-confidence and to reignite their chances of qualifying for World Cup 2018 to be held in Russia. However, it will be a challenge considering Turkey will host Group I leaders Croatia today. Croatia leads the group with 16 points, two points ahead of Ukraine, Iceland is third with 13 points and Turkey sits in fourth with 11 points.

Turkey drew 1-1 in Zagreb in the sides' first section meeting in September 2016. Moreover, the Crescent-Stars have yet to win in eight meetings with Croatia (0-5-3). While coach Mircea Lucescu is expected to assign a different squad from that against Ukraine, and Gökhan Gönül is out with a leg injury. Turkey have two games left after Croatia, they will host Iceland on Oct. 6 and go to Finland on Oct. 9. If Turkey lose against Croatia their qualification chances will decrease dramatically. On Sunday, Domagoj Vida's goal gave Croatia a crucial 1-0 victory over Kosovo in a match that had been stopped on Saturday due to heavy rain in Zagreb.

The Group I encounter resumed in the 21st minute on Sunday with Vida scoring with 16 minutes left. The win took Croatia back above Ukraine to the top of the table. In what is the tightest European group, Ukraine is heading to Iceland today.Elsewhere, Romelu Lukaku's goal allowed Belgium to become the first European nation to clinch qualification for the 2018 World Cup on Sunday as much-fancied France were held to an embarrassing goalless draw by Luxembourg. With just two matches remaining, Belgium enjoy an unassailable eight-point lead over second-placed Bosnia and Herzegovina, for whom Edin Dzeko netted twice in a 4-0 win over Gibraltar. Belgium join Brazil, Iran, Japan, Mexico and hosts Russia in guaranteeing a place at next year's finals.

In the battle for second and a spot in November's play-offs, Bosnia are now a point ahead of Greece and four clear of Cyprus, beaten 1-0 in Estonia.

Sweden, who beat France 2-1 in June, are second after a resounding 4-0 win in Belarus with goals from Emil Forsberg, Christoffer Nyman, Marcus Berg and an Andreas Granqvist penalty.

Meanwhile, the Netherlands boosted their qualification hopes with a 3-1 win over Bulgaria in Amsterdam.

In Group B Switzerland are still on top after making it eight wins from eight with a 3-0 victory in Latvia with Haris Seferovic and Blerim Dzemaili scoring before Ricardo Rodriguez netted a penalty. European champions Portugal are still three points behind the Swiss in second following a 1-0 victory against 10-man Hungary in Budapest as the AC Milan striker Andre Silva netted the only goal.

Portugal still harbor hopes of winning the group and qualifying automatically as Cristiano Ronaldo's side host Switzerland in Lisbon next month.