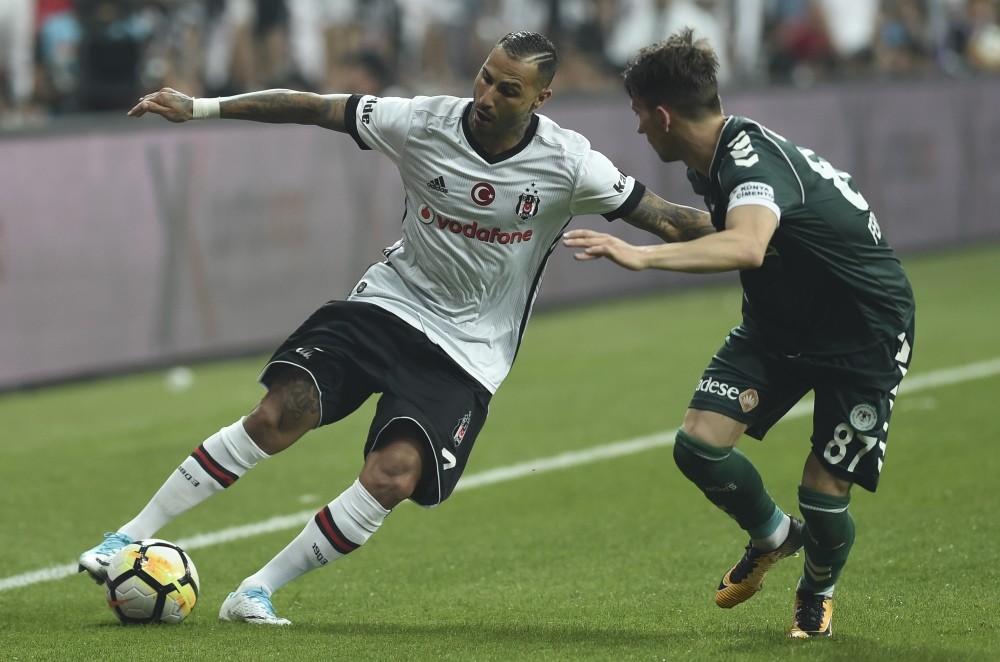 Beu015fiktau015f winger Quaresma manages to get past his opponent to stroke in a powerful shot, giving his team a comfortable 2-0 lead.
by Daily Sabah with AA Sep 20, 2017 12:00 am

The fifth week of the Spor Toto Super League has come to a close with Galatasaray atop the leaderboard, but their archrivals Beşiktaş continue to stalk the Lions. Galatasaray defeated Kasımpaşa 2-0 at home on Saturday, with striker Bafetimbi Gomis continuing his goal-scoring streak by finding the net twice in the victory. However, winning their third consecutive match, Beşiktaş continue to stalk the Lions in the early goings of the title race.

Increasing their unbeaten run to 10 matches, the Eagles defeated Konyaspor 2-0 on Monday evening, with Cenk Tosun and Ricardo Quaresma signing their names on the score sheet.

Playing at their newly renovated home, Istanbul Vodafone Park, Beşiktaş started the match dominant as they took the lead in the 10th minute with a Cenk Tosun header. The first half ended 1-0, but Beşiktaş showed no signs of slowing down in the second half. In the 66th minute, Portuguese winger Ricardo Quaresma managed to get past his opponents and stroke in a powerful shot, giving his team a comfortable 2-0 lead. Second-place Beşiktaş increased their points total to 13 with the win, continuing to follow league leaders Galatasaray. The Beşiktaş-Konyaspor match capped the league's fifth week.

Meanwhile on Sunday, another powerhouse Fenerbahçe managed to beat Alanyaspor 4-1 in an away match. New recruit Vincent Janssen, who joined the team on loan from English Premier League side Tottenham Hotspurs, scored one for the Istanbul club. Also on Sunday afternoon, two of the more powerful teams in the league, Başakşehir and Trabzonspor shared points with a 2-2 draw in Istanbul, with Burak Yılmaz scoring both of Trabzonspor's goals.