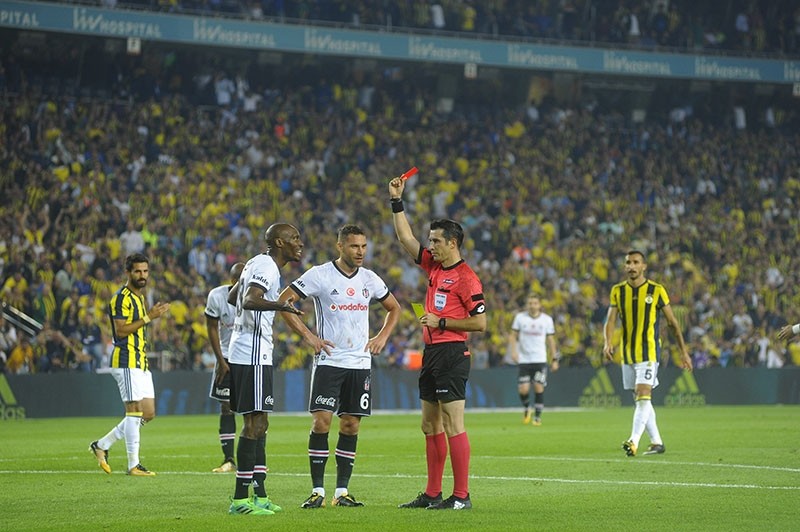 As a result of the war of words from both the powerhouses' administrators, tension between Fenerbahçe and Beşiktaş reached a peak on Saturday in the first derby of the TFF Super League season. Fenerbahçe managed to beat Beşiktas 2-1 at home on the Asian side of Istanbul at Ülker Stadium. However, the referee Ali Palabıyık's decisions marked the game.

Five players were given their marching orders with two red cards dished out in the final minutes. Beşiktaş's Ricardo Quaresma was the first recipient of the referee's wrath when he was sent off in the first half for a bad tackle after two yellow cards.

Fenerbahçe defender Luis Neto soon followed in the 45th minute for bringing another player down. In a dramatic end, red cards were given to Beşiktaş's Atiba Hutchinson and the home team's İsmail Köybaşı, who was given a second yellow for a hard tackle.

Red card number five went to Beşiktaş's Oğuzhan Özyakup who was ordered off the pitch after a second booking following the final whistle for allegedly insulting referee Ali Palabıyık. After the match Özyakup told reporters that he did not insult the referee, he said all he did was "criticize" the ref who "could not take it."

"There was no swearing, no insult," Özyakup told Turkish broadcaster NTV. "He gave me a yellow card, then a red card because I criticized him."

Moving on to the goals, Brazilian midfielder Giuliano scored the first penalty for Fenerbahçe, giving the home team a 1-0 lead in the first half. Then, Dutch striker Vincent Janssen, on loan from Tottenham Hotspur, scored the second penalty for the hosts in the 86th minute with former Liverpool forward Ryan Babel scoring Beşiktaş's only goal a minute later.

The next big Istanbul derby will be on Oct. 22 between Galatasaray and Fenerbahçe. Saturday's red card tally although high was a long way short of the record 36 red cards handed out by a referee in a fifth tier Argentinian league game in 2011 to all the players, substitutes and coaches of Claypole and Victoriano Arenas.

Fenerbahçe, with the 2-1 win, increased their points total to 11 after six matches, while Beşiktaş suffered their first loss of the season and stayed at 13 points.

Meanwhile, the tension between the Istanbul clubs did not end after the match.

Fenerbahçe coach Aykut Kocaman said, "We are a team who can beat every team. I congratulate my footballers. However, the decisions of the referee affected the result of the match. The referee made mistakes against both teams."

"We played three of the most powerful teams in the Super League, Trabzonspor, Başakşehir and Beşiktaş in our home field. Beşiktaş is a team who beat Porto in the Champions League," Kocaman added.

"The ugly cheers that took place during our match happen in all matches. And it's no use for anyone. I am against anger and hate speech," he said. On the same note, Beşiktaş's assistant coach Şeref Çiçek said, "The incidents in the match hindered good football. Both we and Fenerbahçe played well in various parts of the game. But sometimes in the match the incidents overshadowed the game."

"We have left the Fenerbahçe match behind. We have to focus on the game we will play against Leipzig on Tuesday in Champions League," Çiçek said.