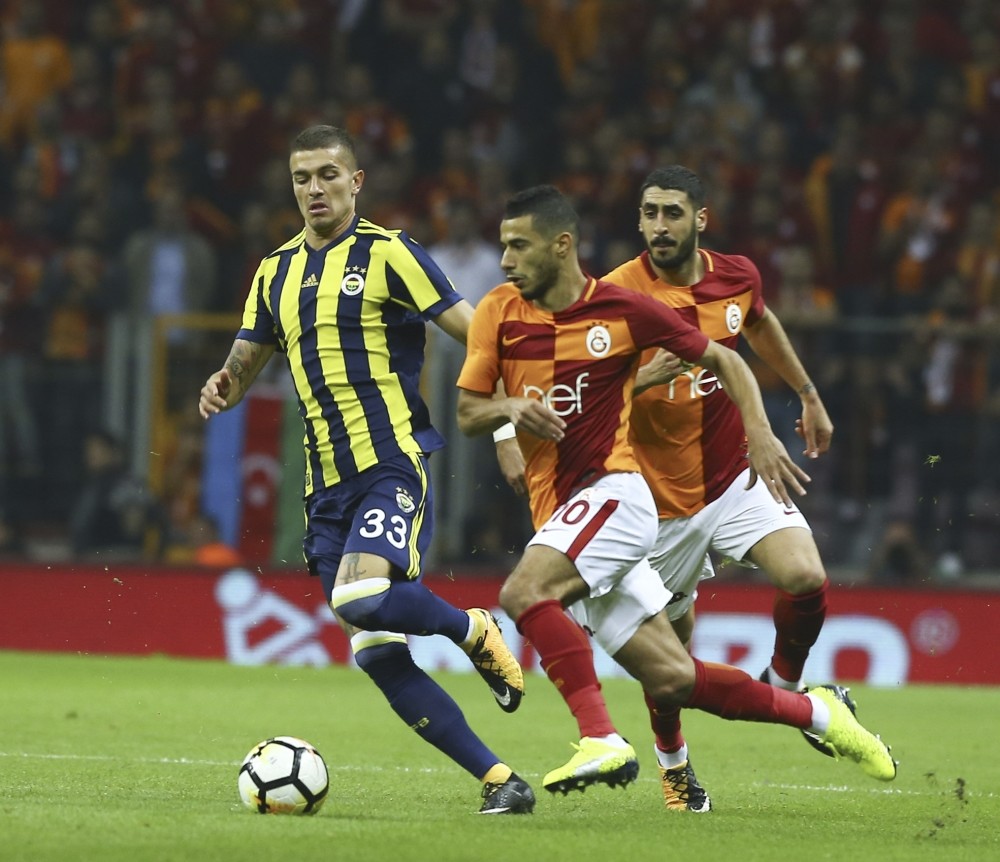 A reeling Fenerbahçe defended its nine-match unbeaten record in derbies as it held high-flying Galatasaray to a goalless draw Sunday.

The Yellow Canaries are now undefeated in their last six Super League matches against city rival Galatasaray. However, it was an opportunity missed for Fenerbahçe as it failed to overcome a Galatasaray side that was reduced to 10 men for the last 17 minutes of the match.

In the first half, Galatasaray players looked nervous after three of them were booked in quick succession. Fenerbahçe, on the other hand, could not capitalize on counterattacks.

In the 73rd minute, Galatasaray's Moroccan midfielder Younes Belhanda was sent off for diving inside Fener's penalty area. Referee Cüneyt Çakır was quick to correct Belhanda and booked him for a second yellow card.

Neither team was able to break the deadlock at Istanbul Türk Telekom Stadium as the overhyped derby ended in an underwhelming stalemate.

With the draw, Galatasaray continues to lead the league with 23 points, while Fenerbahçe is in sixth place with 15 points.

Elsewhere, Antalyaspor beat Kasımpaşa 2-1 Friday as it moved up to 12th place with nine points.

Meanwhile, Göztepe missed an opportunity to clinch three valuable points and bring down the point gap with Galatasaray to four, after the Super League first timer drew 3-3 with Aytemiz Alanyaspor.

Bottom dweller Osmanlıspor, on the other hand, got some much-needed boost thrashing Kardemir Karabükspor 3-0 Saturday.

Third-placed Teleset Mobilya Akhisarspor slipped to a 3-3 draw against Gençlerbirliği and also missed a chance to close the gap with the Lions.

In the meantime, Trabzonspor's slump in the Super League continued. Playing on the road, it was beaten 1-0 by Evkur Yeni Malatyaspor.

Trabzonspor, who began the season with title aspirations, is now 13th with just nine points in nine game weeks. Coach Ersun Yanal was sacked after the Black Sea team was thrashed 6-1 at home by Akhisarspor last week.

Now it has lost the first game under new coach Rıza Çalımbay and face league leader Galatasaray next week.

In the other two matches this game week, Demir Grup Sivasspor and Bursaspor fired blanks, while Kayserispor beat a reeling Atiker Konyaspor 2-1.