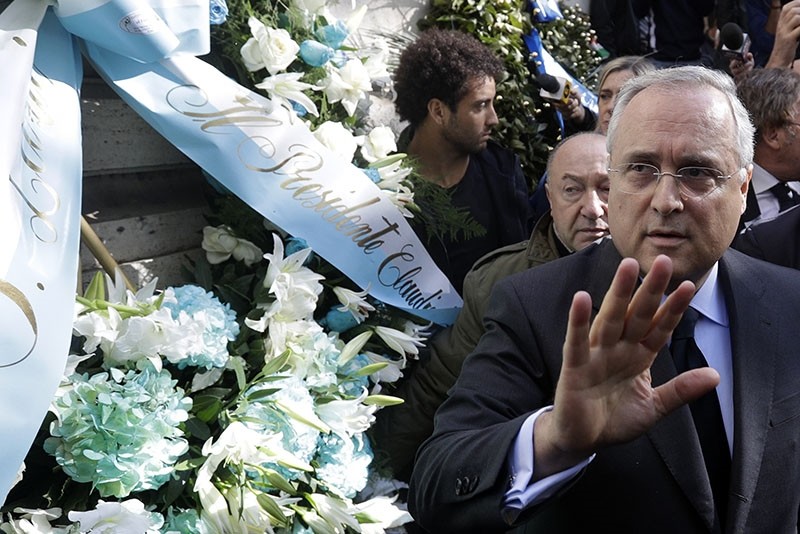 Lazio soccer team president Claudio Lotito gives a statement to the press after laying a wreath outside Rome's Synagogue (AP Photo)
by Compiled from Wire Services Oct 24, 2017 12:00 am

Lotito explained that Lazio would also be undertaking a series of initiatives such as visits by players to schools to educate on respecting rules and stamping out racism and social barriers.

In addition, the Italian soccer federation said a passage from Anne Frank's diary will be read before matches this week to condemn the acts of anti-Semitism by Lazio fans and to keep alive memories of the Holocaust.

A minute of silence will be observed before Serie A, B and C matches this week, plus amateur and youth games over the weekend, added FIGC.

Earlier this week, Lazio fans plastered anti-Semitic stickers and graffiti at a Rome stadium that included images of Frank, the young diarist who died in the Holocaust, wearing a jersey of the rival Roma team. It was the latest in a long line of racist or anti-Semitic incidents involving Lazio supporters.

The incident led to widespread condemnation with Italian president Sergio Mattarella saying the use of Frank's image, "as well as being inhumane, is alarming for our country which suffered 80 years ago from the cruelty of anti-Semitism."

But Lazio's 'Irriducibili' fan group refused to distance themselves, stating they were surprised by the furore.

"We are surprised by such a response from the media. Everything should be mitigated by the context," a statement read. "We simply wonder why nobody takes our side when we are the victims of these alleged incidents."