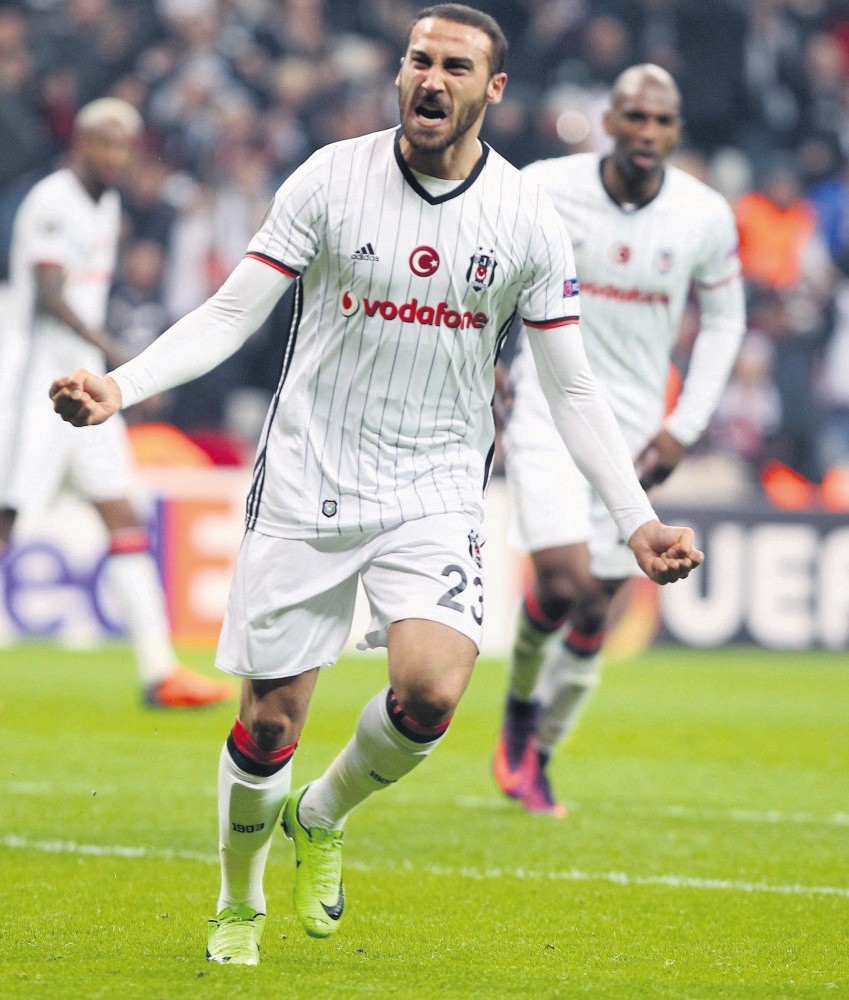 Born to Turkish parents in Germany, Cenk Tosun is one of a growing number of Turkish-origin players such as Hakan u00c7alhanou011flu and Emre Mor who were born abroad but have worn the Turkish colors.
by French Press Agency - AFP
Nov 02, 2017 12:00 am

The top scorer for Istanbul's Beşiktaş last season and one of the standout players of the current Champions League, Turkish striker Cenk Tosun is now firmly in the sights of clubs from the Premiership and elsewhere. Tosun tore apart the defense of Monaco in a memorable away win for Beşiktaş in the Champions League group stage clash on Oct. 17, scoring two goals and effectively ending the hopes of last year's semifinalists of going any further. The scintillating performances by Germany-born Tosun, 26, who has scored eight goals in all competitions this year alone, have not gone unnoticed outside of Turkey. The British press reported that Newcastle, Crystal Palace, and Everton were all interested in the striker while interest has also been noted from AC Milan. There are hopes in Turkey, where Tosun has made 23 appearances for his home country, that the player will emerge as a striker of international class.

"I work a lot," said Tosun, explaining his success. "I work collectively and individually and I hope to make up for my weak points."

Born to Turkish parents in the German town of Wetzlar, Tosun is one of a growing number of Turkish origin players such as Hakan Çalhanoğlu and Emre Mor who were born abroad but have worn the Turkish colors. Tosun came through the Eintracht Frankfurt's youth system and played several times for German national youth teams. He moved to southeast Turkey's Gaziantep in 2011 and secured a transfer to Beşiktaş in 2014. The club has seen star strikers come and go in the last years, especially Demba Ba in 2014, Mario Gomez in 2015 and it took Tosun some time to find a regular first-team place. But he did not complain.

"I got a lot of experience playing next to Demba Ba and Mario Gomez," he said. And the patience paid off with Tosun, the club's top scorer with 24 goals, as it retained the title in 2017. His father Şenol, who remains in charge of his career, taught him to be a versatile player by forbidding him from using his right foot all the time. As a result, Tosun scored his three goals in the Champions League this season with one via the right foot (against Porto) and a header and left-footed goal against Monaco. His heroes are the great Argentinian striker Gabriel Batistuta and the basketball icon Michael Jordan. His number 23 shirt is an homage to the former Chicago Bulls star. In Turkey, he is known as Tosun Pasha, in reference to a popular Turkish 1970s comedy show. The British press has put a 20 million pound price tag on the player and Beşiktaş could be sorely tempted by a good offer when the transfer window reopens.