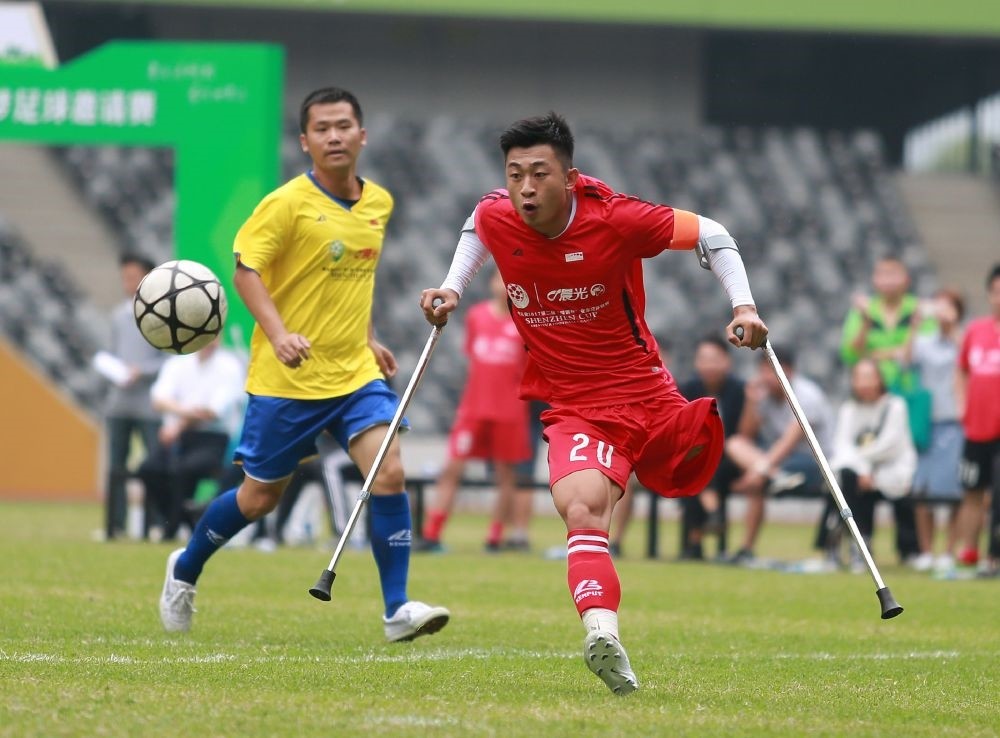 He Yiyi kicks the ball during a football match with a local team in Guangzhou, Guangdong province.
by Nov 18, 2017 12:00 am

A one-legged footballer has captured the hearts of millions of Chinese fans after a widely circulated video showed him holding his own against able-bodied opponents and scoring a rasping right-footed drive. The exploits of 21-year-old He Yiyi, who lost his leg to childhood cancer and uses crutches to support himself when playing, have earned him several endearing nicknames, including "Angel with Broken Wings," "Ball King with One Leg" and "Magic Boy." He, who had gained the notice of a French scout as a child before losing his leg, plays in the odd pick-up match in the southern province of Guangdong after being denied access to organized amateur leagues. But some Chinese football supporters, fed up with the underachieving national side, have playfully suggested He could be the answer to their problems.

A video of He playing an exhibition and talking about the challenges he faces against able-bodied opponents has been watched nearly four million times online, and counting. In footage from the game, the striker receives the ball just inside the box, controls it with his right foot and then with his next touch lashes it into the top corner. In another clip, He races to the byline on his crutches and pulls the ball back for an onrushing forward, but the goalkeeper smothers it.

In 2008, just before his life-changing diagnosis, He was spotted by a French scout, and he was all set to go to France to forge a career as a professional. But before he could even get a passport the pain he had been suffering for some time in his left leg was diagnosed as osteosarcoma, a cancer that most commonly occurs in children and young adults. Doctors told him that his best chance of long-term survival was to have his leg amputated. He said that on the rare occasions he is allowed to play competitive football, opponents often target, tease or abuse him. "They want me out in the first few minutes and will shout, 'What are you doing here'?" he said.

He prefers crutches to an artificial leg because his amputation is high up on his left leg, so a prosthesis would give him very limited control -- plus crutches are more comfortable. And he purposely uses cheap crutches so that when opponents tackle him the crutches will just break rather than hurt the other player, as sturdier ones might.