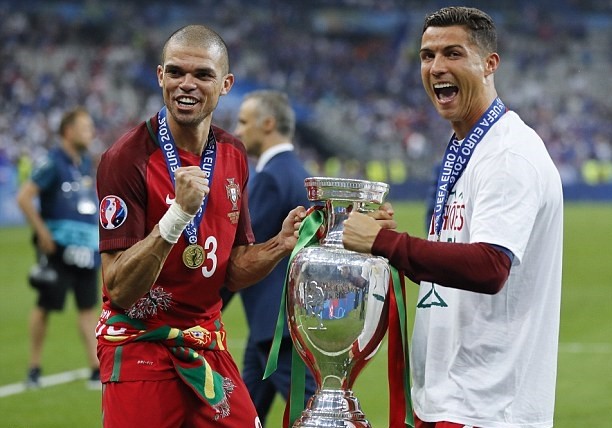 The punchline made famous by Beşiktaş fans last summer was in the headlines again after the Black Eagles Portuguese star Pepe called on countryman and former teammate at Real Madrid, Cristiano Ronaldo, to ‘come to Beşiktaş'

Beşiktaş's Portuguese start Pepe has called his countryman and former teammate at Real Madrid Cristiano Ronaldo to join the Black Eagles by saying, "Come to Beşiktaş," a punch line that became a twitter hit during the last summer transfer window.

After a claiming the Turkish Super League title last season, Beşiktaş was looking to looking to make its international presence felt by landing some key players. The club found a creative, if not awkward, way of unveiling its new signings.

The club's social media accounts shared a series of videos that showed their Portuguese midfielder Ricardo Quaresma and Pepe calling their former teammate. The video, accompanied by some upbeat music, quickly went viral on social media and the hashtag #ComeToBeşiktaş was soon trending on Twitter and Instagram. Beşiktaş fans then flooded social media pages of different international clubs with the slogan.

Meanwhile, Real's Cristiano Ronaldo responded to Beşiktaş fans' in an Instagram video, saying Beşiktaş didn't need him as they already have Pepe and Quaresma.

In his reaction, Pepe told CNN that "of course" he would like Ronaldo to come to Istanbul.

"He is a person for whom I have maximum respect. He is a friend and an extremely important person to me. If it were possible, of course, I'd love to see him in Beşiktaş," he said, describing Ronaldo as "an extremely normal person off the pitch."

"People talk without knowing the real Cristiano. He likes his relatives. He loves his sons. He stresses the importance of being a father which I think is important."

Speaking about his transfer to Beşiktaş, Pepe said: "I had many offers from big, important European clubs. When Beşiktaş came to me with their offer and their project, it grabbed my attention. Many, many people sent me messages on social media. I couldn't say no. I couldn't turn my back on all this affection. I said I have to go to Beşiktaş. It's impossible for me to not to come to Beşiktaş!"

Pepe donned the Real Madrid jersey for almost a decade but was left without a contract in June after he rejected a one-year extension with the Spanish club.

The 34-year-old center back rose to prominence for Portuguese side Porto, Beşiktaş's rival in UEFA Champions League Group G. But it was in Real Madrid where he shone and shared the glory in three Champions League and three La Liga titles.