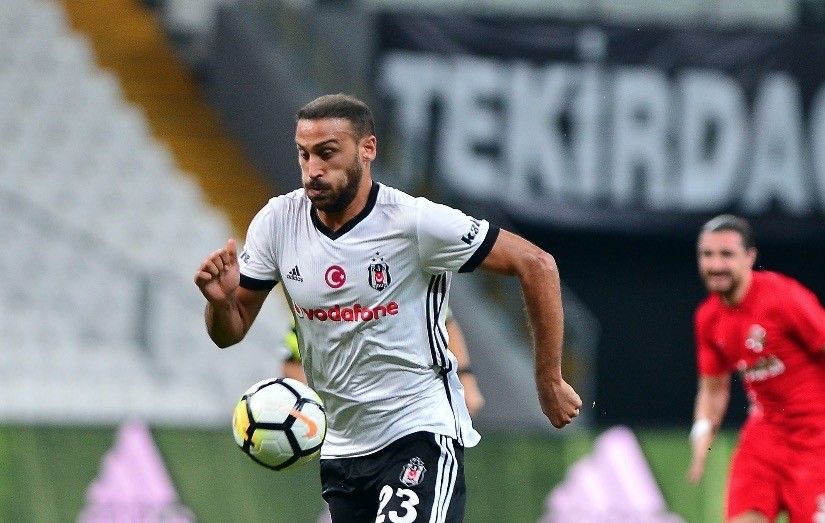 The top scorer for Beu015fiktau015f last season and one of the standout players of the current Champions League, Cenk Tosun is now firmly in the sights of clubs from the Premiership and elsewhere.
by Hakan Baş Dec 01, 2017 12:00 am

Turkish Super League will brace for one of the key ties of the season this weekend when cross-town rivals Beşiktaş and Galatasaray go up against each other for an Istanbul derby Saturday.

Buoyed by a 2-0 win last week, league leaders Galatasaray will have the upper hand against the Black Eagles, who are now trailing the Lions by six points after firing two blanks in two weeks.

The derby will also be critical for Galatasaray coach Igor Tudor, amid calls for his sacking after the 5-1 defeat against Başakşehir in game week 12. Tudor, not known for his ability to win big matches, will look to prove his critics wrong. Under him, Galatasaray drew 0-0 with archrivals Fenerbahçe in the ninth week before being defeated 2-1 by a Trabzonspor side that has struggled much of the season so far. Speaking to the press last week, Tudor brushed off rumors of his sacking and blamed the media for it.

"It is a shame. You [the media] always show me as a bad coach but Galatasaray is on top now," he said.

"We are just actors for you, the show must go on but the actors must always be replaced. Everything is only black or white for the media," said Tudor.

Meanwhile, Beşiktaş will look to up its game ahead of the derby after it was held to a 0-0 stalemate by Evkur Yeni Malatyaspor last week. With four draws in last five matches, Beşiktaş now has 23 points, six less than its archrival Galatasaray. It would want to use its home advantage Saturday to close that gap. Though Tudor slammed his critics, the statistics certainly speaks against the Galatasaray coach. The club has lost 10 and drew four of its last 14 matches against top rivals, including Fenerbahçe, Beşiktaş, Trabzonspor and Medipol Başakşehir.

Under Tudor, the Lions lost six big matches and drew one. It also could not win the last four matches against Beşiktaş, losing three and drawing one. Beşiktaş, on the other hand, has a great home record. The Eagles haven't lost in the last 33 matches at Vodafone Park. Of them, it won 26 and drew seven. The last match it lost at home was against Alanyaspor in the 2015-2016 season.

Beşiktaş coach Şenol Güneş won four out of nine derbies, while three ended in draws and lost two. He has won three times against Galatasaray as Beşiktaş coach. The match may likely go down to the wires as both teams have often scored late, in the last 15 minutes, this season. Beşiktaş has scored five times and conceded four while Galatasaray scored nine goals and conceded five in the 15 minutes of a match this season. Conceding only 12 goals as of game week 13, Beşiktaş apparently has the best defense so far this season. On the other hand, Galatasaray is the most scoring team with 29 goals in 13 weeks. This will be the second Beşiktaş-Galatasaray derby at the new Vodafone Park sta