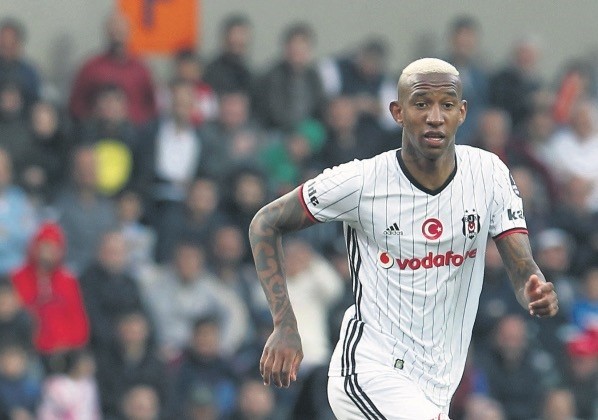 Talisca has been approached by an unnamed Chinese Super League club.
by Daily Sabah Dec 16, 2017 12:00 am

While attacking midfielder Anderson Talisca has been approached by an unnamed Chinese Super League club, Stuttgart, which lacks a goal-scoring forward, has become the latest to join the race for Cenk Tosun

With the first half of the season almost over, most football clubs are looking into options to overcome the weaknesses in their squads. Turkish champions Beşiktaş and its players, after an inspiring performance in the Champions League, have attracted the attention of foreign clubs. A number of European clubs, including Chelsea, have already shown interest for the Black Eagles' star performer, Cenk Tosun. German club Stuttgart was the latest to join the race for $40-million striker, who has directly been involved in 15 goals this season. Earlier, Beşiktaş General Secretary Ahmet Ürkmezgil confirmed that the Blues were scouting Tosun, according to turkishfootball.com. Tosun has been outstanding in the Champions League scoring four times and providing two assists. Beşiktaş booked a place in the Champions League Last 16 as Group G leaders, the first Turkish side to do so.

The Black Eagles' ace is not expected to leave the club in January but an end of season move cannot be ruled out. Beşiktaş has valued Tosun at $40 million, with another two-years remaining on his current contract.

Another Beşiktaş footballer to dominate the transfer market agenda was Anderson Talisca, who will play for the Istanbul side till June 2019 under a loan-deal with Benfica. The Turkish language sports daily, Fanatik claimed that the footballer has been approached by an unnamed Chinese Super League club, which bid 25 million euros for the Portuguese midfielder. If Benfica agrees to sell him, Beşiktaş will also receive around 4 million euros.

Meanwhile, in the Turkish Super League, the first 15 game weeks have seen a very close race for the title. Leader Galatasaray has 32 points and is followed by Medipol Başakşehir with 30 points. On Sunday, Galatasaray will travel to Malatya to play against bottom dwellers Evkur Malatyaspor while Başakşehir hosts Antalyaspor, which has a bad run in the recent weeks. Galatasaray's will be without its prolific scorer, Bafetimbi Gomis, who serves a one-match suspension after a red card last week.

Third-placed Fenerbahçe will look to extend its winning run against Kardemir Karabükspor, which is anchored to the deep in standings. Fenerbahçe's Brazilian striker Fernandao who has been away from the pitches for a long time due to injury may return to the squad after he scored two goals against Adanademirspor on Thursday's Ziraat Turkish Cup match. Ahead of the match, Karabük parted ways with its coach Tony Popovic. In the meantime, champion Beşiktaş will want to compensate for the lost points. Fourth place Beşiktaş will host Osmanlıspor Sunday and work hard to close the five-point-gap with leader Galatasaray. Although it finished the Champions League Group G as the leader, the Eagles are yet to put on a similar performance in the domestic league. It is now behind archrivals Fenerbahçe and Galatasaray.