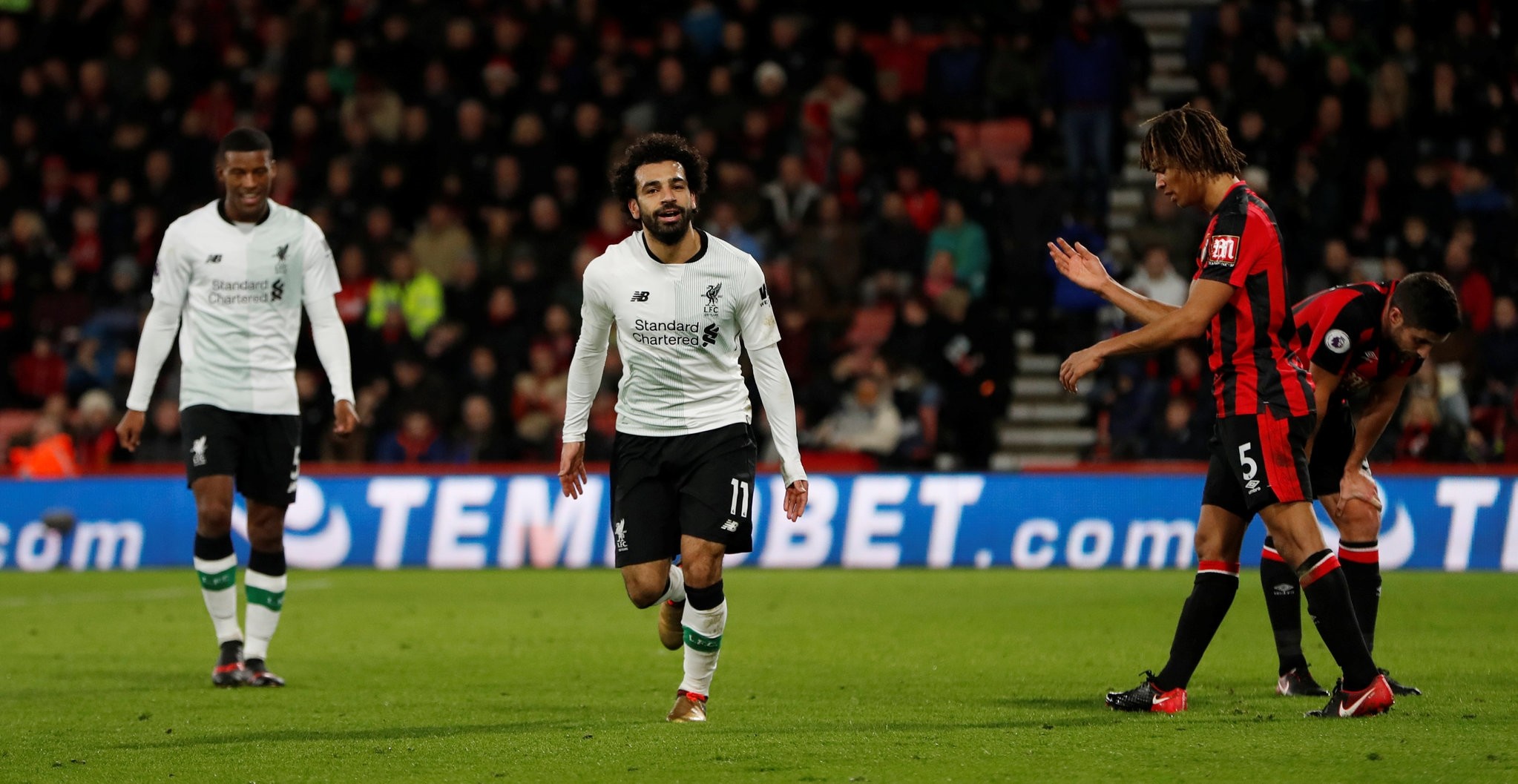 Mohamed Salah reached 20 goals in all competitions in his first season for Liverpool by scoring in a 4-0 win over Bournemouth that lifted his team into the Premier League's top four on Sunday.

In a devastating attacking display by Liverpool on the south coast, the Egypt winger was an inevitable scorer to move his league-high tally to 14 goals.

Philippe Coutinho, from a jinking solo run, and Dejan Lovren had already netted in the opening 26 minutes and Salah's goal put Liverpool 3-0 ahead at halftime.

With memories still raw about squandering a 3-1 lead to lose 4-3 in this fixture a year ago, Liverpool didn't let up and Roberto Firmino completed the rout with a diving header off Coutinho's cross in the 66th minute.

The Reds rebounded from back-to-back draws at Anfield — to Everton, then West Bromwich Albion — with another big away victory, having already won 5-1 at Brighton this month. Liverpool climbed above Burnley and Arsenal back into the Champions League qualification positions.

Salah is the first Liverpool player to get to 20 goals in a season by December since Ian Rush in 1986, and showed once more against Bournemouth why he is proving to be the best signing of last summer.

He gave Bournemouth left back Charlie Daniels non-stop problems in the first half, cutting inside and wasting two great chances before doing the same with different results for his now-trademark goal in the 44th.

Coutinho's goal was the highlight. The Brazilian raced down the left and used teammate Andrew Robertson as a decoy before cutting inside past two players and squeezing a shot inside the post to make it 1-0 after 20 minutes.

Firmino hooked the ball back at the far post following a corner, for Lovren to dive in and head home for the second.

Bournemouth played into Liverpool's hands by taking on the visitors and leaving space behind its back four for the likes of Salah and Firmino to exploit. Things could have been different, however, had Jermain Defoe found the net in the 39th — when the score was 2-0 — rather than strike the base of the post.

Alex Oxlade-Chamberlain did the same for Liverpool in the second half before Coutinho curled in an enticing cross that Firmino, potentially from an offside position, ran onto and flicked a header past stranded goalkeeper Asmir Begovic.