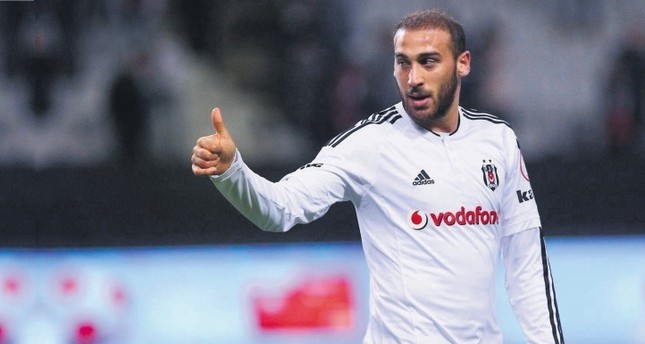 Beşiktaş coach Şenol Güneş appears to have a magic touch for nurturing strikers, as he oversaw Cenk Tosun's meteoric rise in Beşiktaş, leading to the striker's possible astronomic move to the Premier League.

A quick look at Güneş's coaching career shows how he has spotted and nurtured forwards over the years. Strikers who flourished under him include names like, Shota Arveladze, Fatih Tekke, Burak Yılmaz, Fernandao and Mario Gomez. Tosun is the latest to join that group as he heads for Everton.

The first star striker to bloom under Güneş was Trabzonspor's Shota Arveladze in the 1995-1996 season. The Georgian striker became the Super League top scorer that season with 25 goals and was swiftly picked up next season by the Dutch giant, Ajax.

In the 2004-2005 season, Güneş oversaw the rebirth of Turkish striker Fatih Tekke at Trabzonspor. Under the watchful eyes of Güneş, Tekke became the top scorer that season. The following year he signed for Russia's Zenit Saint Petersburg, where he enjoyed the league and UEFA titles.

Another star who flourished under Güneş was none other than the Turkish marksman, Burak Yılmaz. A talented young footballer, Yılmaz played as a left winger for Beşiktaş and later as a right winger for Fenerbahçe but failed to impress at both clubs.

Just as he was falling out of favor with the minnows Eskişehşrspor, Güneş transferred him in for Trabzonspor and handed him the frontline duties. That decision saw history repeat itself as Yılmaz scored 33 times in the 2011-2012 season and was immediately on the radar of powerhouse Galatasaray.

Moving on to coach Bursaspor in the 2014-2015 season, Güneş found a new star striker in the team's Brazilian forward, Fernandao. He scored 22 goals that season and was soon grabbed up by Istanbul giants Fenerbahçe.

The Brazilian, however, struggled to repeat similar form for the Yellow Canaries and was doomed to bench.

Güneş should also be credited for reviving German big man Mario Gomez's career. Just when everybody thought his days as a striker was numerable, Gomez came back to life under Güneş in Beşiktaş.

In the 2015-2016 season, he scored 26 goals during his short loan spell with the Black Eagles. The performance earned him a call from the German national side after a long absence. The following season, he was called in by Bundesliga side Wolfsburg, where he has so far struggled for form.

Meanwhile, Fikret Orman, the chairman of Beşiktaş yesterday said there was still no deal with English Premier League side Everton for Cenk Tosun. "Beşiktaş is a serious institution and all moves are taken very seriously," club chairman Fikret Orman said at the signing ceremony for new Croatian arrival, defender Domagoj Vida. "Cenk is a very valuable player."

"The talks are continuing. If it all works, it will be fine, if not then it won't," he said, quoted by the Dogan news agency.

"We will move according to our own strategy. We have our own targets and the player's future is also important for us."

"Nothing final has been reached yet," he said, revealing that Beşiktaş had also received a 35 million-euro offer for the player from China.