Holder Arsenal crashes out of FA Cup to Nottingham Forest 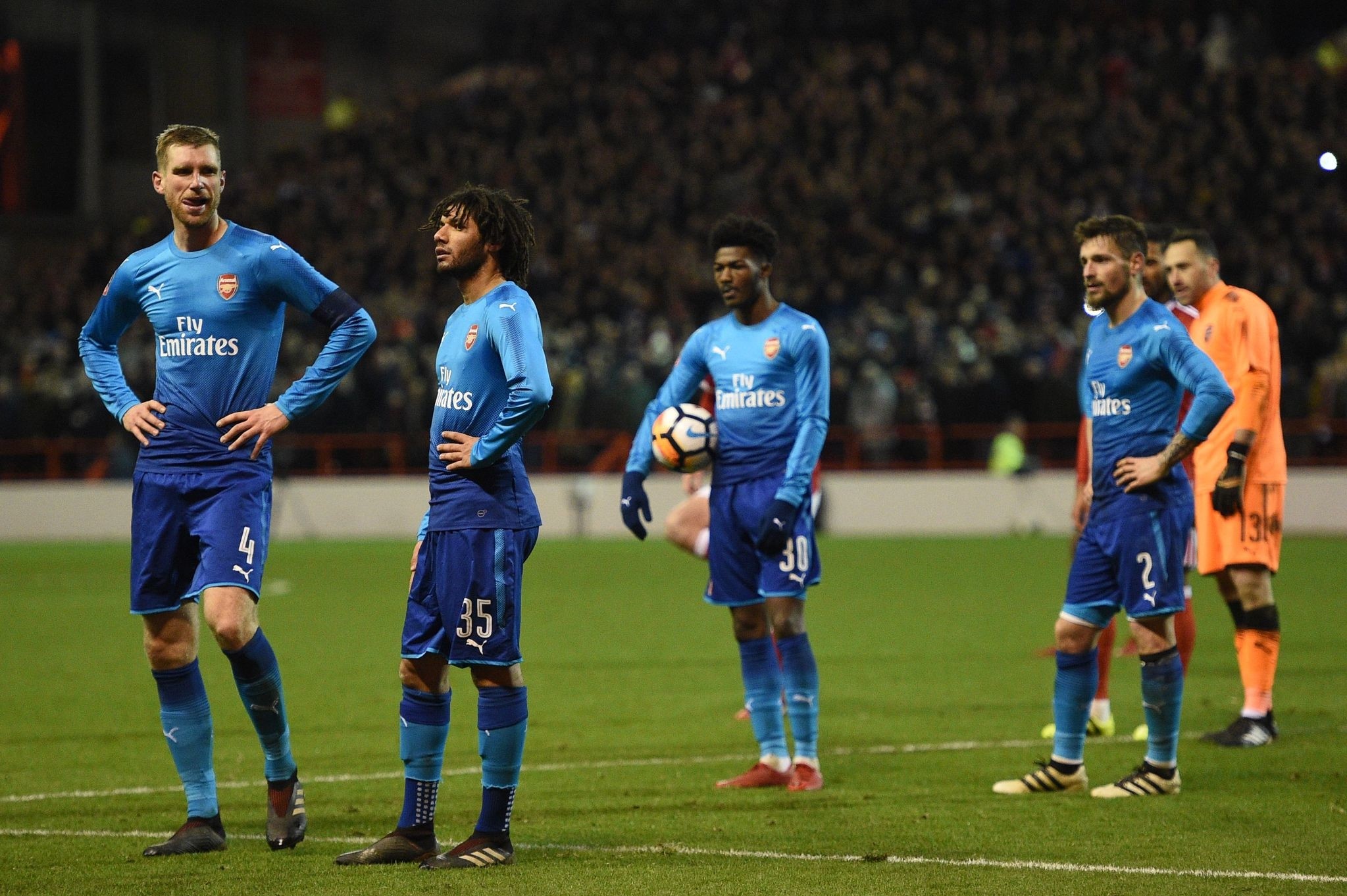 Arsenal players react to the awarding of the second penalty to Nottingham Forest during the English FA Cup third round football match between Nottingham Forest and Arsenal at The City Ground in Nottingham, central England, on January 7, 2018. (AFP Ph
by French Press Agency - AFP
Jan 07, 2018 12:00 am

FA Cup holder Arsenal was sensationally dumped out of the competition by Nottingham Forest on Sunday, joining Leeds United as big-name casualties on a day of shocks.

Elsewhere, West Ham stayed alive with a goalless draw at Shrewsbury and Tottenham scored three goals in eight second-half minutes to see off the challenge of League One side AFC Wimbledon.

Championship side Forest revived memories of their glory years under Brian Clough, putting 13-times winners Arsenal to the sword in an incident-packed 4-2 win at the City Ground.

"It was good. My wife told me that if I score a hat-trick at any point this year then I get a dog, so I was trying to get the penalty," said two-goal hero Eric Lichaj.

US international Lichaj opened the scoring for the home side with a header midway through the first half but Per Mertesacker equalised for the much-changed away team just three minutes later.

However, Forest continued to probe an inexperienced Arsenal line-up and got their reward just before half-time when Lichaj volleyed in spectacularly from the edge of the box.

Arsenal manager Arsene Wenger, serving a touchline ban, was forced to watch powerless from the stands as Rob Holding conceded a penalty that teenager Ben Brereton converted in the 64th minute to stretch the home side's lead to 3-1.

Danny Welbeck gave Arsenal hope with just over 10 minutes to go but Kieran Dowell netted from the penalty spot again to seal a 4-2 win for the second-tier side over the Premier League visitors.

In a breathless final few minutes Forest's Joe Worrall was sent off but it was too late for Arsenal.

In the early kick-off, on-loan forward Shawn McCoulsky headed in a dramatic 89th-minute winner for Welsh club Newport to seal a 2-1 victory against 1972 Cup winners Leeds.

But Newport, currently 11th in League Two -- the fourth tier of the English game -- levelled 14 minutes from time when Leeds defender Conor Shaughnessy sliced into his own net.

Infused with fresh belief in front of a passionate Welsh crowd, Newport pressed for a winner, and with a minute to go on-loan substitute McCoulsky rose highest at a corner to head in the decisive goal and send the stadium into raptures.

Much-changed Leeds were then reduced to 10 men when substitute Samuel Saiz was immediately sent off over an off-the-ball incident.

West Ham had goalkeeper Joe Hart to thank for keeping them in the Cup with a 0-0 draw after an uninspired performance against Shrewsbury Town of the third tier.

The England goalkeeper, returning to the club where he started his career, made a fine save from Mat Sadler with about 10 minutes to go until the interval and repeated the trick against Alex Rodman to keep the score at 0-0.

"But we have a replay to look forward to," he added. "We know it will be tough. They will be at home, more comfortable in their own stadium."

At Wembley, Harry Kane broke the deadlock against AFC Wimbledon with just under half an hour to go before Kane again and Jan Vertonghen made it 3-0 to put the game beyond the reach of the visitors.