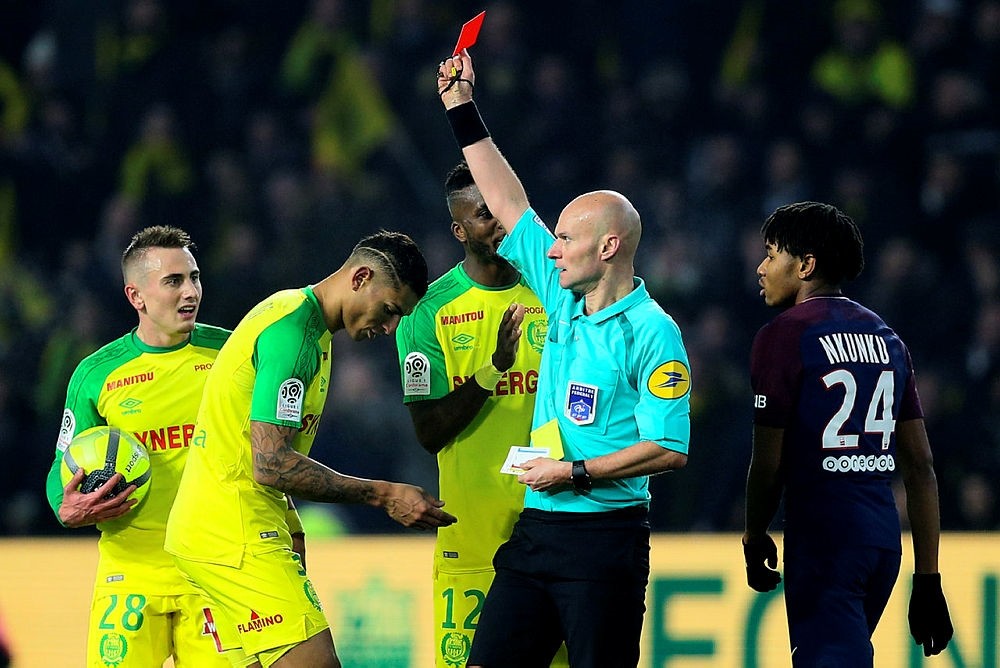 Referee Tony Chapron gives a red card to Nantes defender Diego Carlos, left, after Carlos inadvertently clipped the referee's heels during the French League One soccer match between Nantes and Paris Saint Germain. (AP Photo)
by Compiled from Wire Services Jan 15, 2018 12:00 am
The French soccer federation suspended referee Tony Chapron until further notice on Monday after the official kicked a player during a league match.

The federation said Chapron will be summoned by French league officials to a disciplinary hearing following Sunday's incident, when he kicked Nantes defender Diego Carlos before sending him off.

Chapron, who was to referee again on Wednesday when Angers faces Troyes, has been removed from the game.

The bizarre incident happened near the end of Paris Saint-Germain's 1-0 win at Nantes. Carlos was running behind Chapron near the halfway line, and trying to catch up with play, when he inadvertently clipped the referee's heels.

Chapron rolled forward onto the turf then swiped his right leg at Carlos after tumbling in an incident reminiscent of David Beckham at the 1998 World Cup. Chapron eventually got up and showed Carlos a second yellow card.

Football world bewildered as French referee kicks, sends off player who accidentally knocked him down during PSG-Nantes fixture in Ligue 1https://t.co/XO2YvJcXUH pic.twitter.com/IypTuZtiUe

Chapron acknowledged that Carlos inadvertently knocked him over, and he submitted further details in his report to the French league's disciplinary committee. The French league said members of the committee discussed the issue over the phone and via emails, then decided to rescind the second yellow card shown to Carlos.

"After reading the additional report from Tony Chapron, who confirmed after viewing images that Diego Carlos had not struck him deliberately, the committee decided to withdraw the second yellow card shown to the player," the league said.

As a result, Carlos will able to play against Toulouse on Wednesday in the French league.

"He told me that he had never wanted to kick the player and that he had felt himself pushed in the back," said Nantes president Waldemar Kita after talking to Chapron.

"It's a joke. I got 20 text messages from across the world telling me this referee is a joke," Kita told French TV. "What do you want me to say? If I speak too much I'll be called in front of an ethics commission. We have no right to say anything."

Nantes midfielder Valentin Rongier had a good view of the incident and called for the referee to be given a lengthy ban.

"He says he slipped, but I know he kicked him," Rongier told Canal+. "I know it's very difficult to referee but you have to question them from time to time... We do that, we get a 10-match ban."

Former England striker Gary Lineker and ex-Real Madrid goalkeeper Iker Casillas were among those to express their bemusement on Twitter.

"Surely the good man will have apologized. It was spontaneous," wrote Casillas. "Yes, for me it's aggression and red! Three matches minimum!"

There is little suspense in the league with PSG dropping only seven points from a possible 60. Defending champion Monaco is in second place, level on points with Lyon, but neither seemingly has the caliber to pressure PSG by going on a lengthy winning run.

Even without playing its usual scintillating football, PSG was able to scrape past a lackluster Nantes side coached by Claudio Ranieri.

He guided Leicester City to the 2015-16 English Premier League title in one of the biggest upsets in soccer history, but Nantes remains in fifth place and does not seem to have enough flair to go higher.

Angel Di Maria scored in the 12th minute with the home defense slow to react.

Kylian Mbappe left striker Edinson Cavani's probing pass go through his legs and the unmarked Di Maria toe-poked the ball into the left corner. It was his third league goal of the season and followed his brace last Sunday in the French Cup.

PSG carved Nantes open with a swift counterattacking move late in the first half, but Di Maria blazed over an open goal after midfielder Adrien Rabiot set him up perfectly.

Nantes striker Emiliano Sala thought he had equalized in the 60th when he headed powerfully home from a free-kick but it was harshly ruled out for offside. There was no VAR to validate the goal, even though television replays showed Sala was level with Cavani when he made his run into the area.

"Sala ran in from behind and it's a valid goal," Ranieri said. "But that's football. We'll forget this game and think of the next one."

Cavani needed just one more goal to move level with Zlatan Ibrahimovic as PSG's all-time leading scorer on 156. He could get the record at home to Dijon on Wednesday.