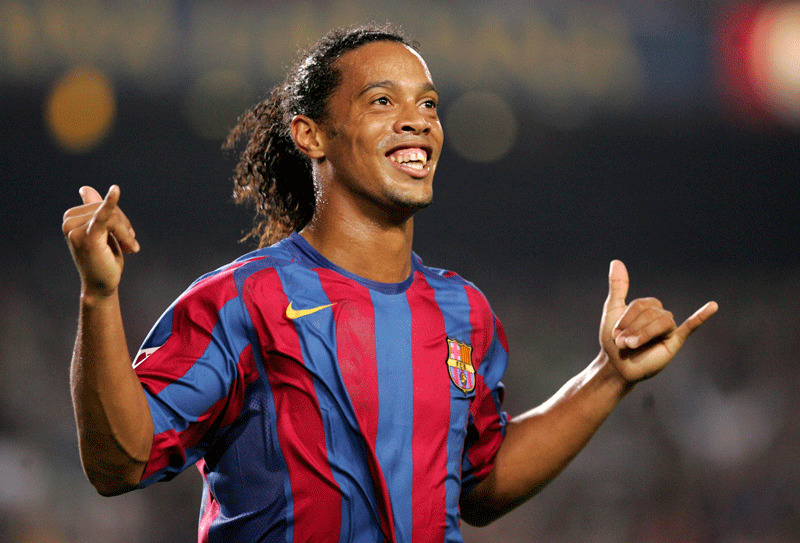 Ronaldinho, "the ever-smiling magician" of Barcelona, as described by his former club, has ended his professional career.

Roberto Assis, the brother and agent of the 2005 Ballon d'Or winner, announced Tuesday that the 37-year-old wants to play a series of farewell matches from August — and then focus on his already busy life off the pitch.

"Ronnie's professional career is over. He wants to be a football ambassador, do charity, and work with his friends in music from now on," Assis told The Associated Press.

Assis hopes to schedule some farewell matches for Ronaldinho after the World Cup in Russia, which ends July 15. The initial plan is to play games in Brazil, Europe and Asia and to also get Brazil's national team involved, Assis said.

Last July, Ronaldinho said on the sidelines of a friendly in Chechnya that was he was "too old" to return to action. He repeated that to a Brazilian TV in November, but did not rule out reconsidering.

"We pay tribute to this ace that shone using the yellow shirt," Brazil's football confederation posted on Twitter. "Thanks for all the magic, Ronaldinho."

At the 2002 World Cup, Ronaldinho played second fiddle to midfielder Rivaldo and striker Ronaldo, but he was instrumental in the 2-1 quarterfinal victory over England, with an assist and scoring a remarkable free kick goal from long range.

Four years later, with Brazil as heavy favorites for the title and Ronaldinho considered the best player in the world, he failed to deliver. Brazil was knocked out in the quarterfinals by France.

Ronaldinho started his professional career at Gremio in southern Brazil in 1998. He left for Paris Saint-Germain in 2001 and was signed by Barcelona two seasons later.

At the Camp Nou, Ronaldinho was an integral member of a squad that took Barca back to the limelight. He played 207 games and gave 94 goals and 61 assists to the team.

However, after a series of club trophies, Ronaldinho's career took a downturn. He was often accused by Brazilian and Spanish media of lacking professionalism, despite his mentoring of a then youthful Lionel Messi.

His former club paid tribute to the Brazilian star, tweeting: "Camp Nou's ever-smiling magician. Thanks for everything!"

In 2008, with Messi then leading the Catalan team, Ronaldinho left for AC Milan. Despite being part of a squad that won Serie A in 2011, he failed to reach his previous heights as a player.

AC Milan also praised Ronaldinho. "The man who enchanted San Siro and every football fan," the Italian club said in a Twitter post. "Ronaldinho retires after illuminating pitches all over the world with his magic."

When returning home became a real option, Ronaldinho frustrated Gremio's efforts to re-sign him and joined Flamengo instead.

Disappointing performances in Rio de Janeiro took him to Atletico Mineiro, a club that then was more often fighting against relegation than for titles.

Yet a more mature Ronaldinho took Atletico to a different level.

In his last great run, Ronaldinho carried Atletico with his superb passes and dazzling dribbles to second place in the 2012 Brazilian Championship.

A year later, he was the key to his club lifting its first Copa Libertadores, South America's most prestigious club trophy, but his hopes of playing at the 2014 World Cup in Brazil were dashed.

Ronaldinho left to play for Mexico's Queretaro in 2014-15, but was mostly on the bench.

He played his last seven matches as a professional for Fluminense, though his performances were a far cry from his best days in Spain.

"In football there is not much to explain," Ronaldinho e recently said in an interview with Brazilian TV. "Either you're there or you're not. I want to be remembered for the time I was there."