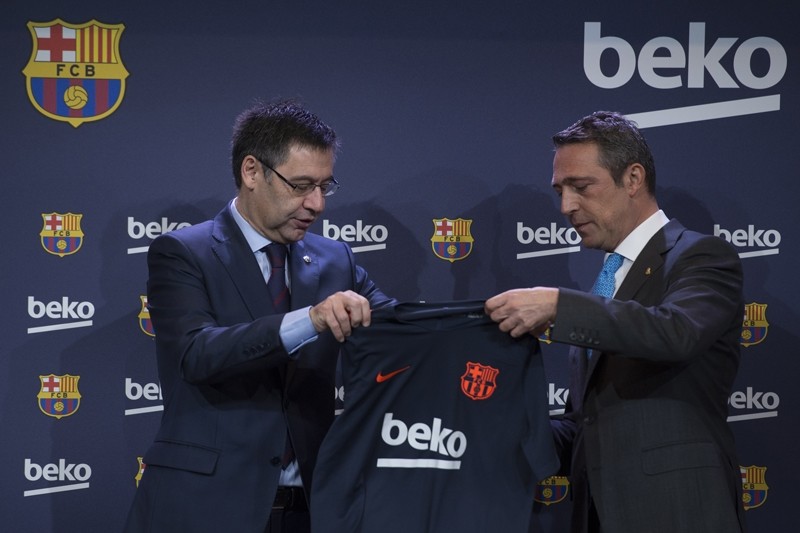 FC Barcelona announced Thursday the extension of its sponsorship agreement with Turkish electronics company Beko worth a total of 57 million euros for the next three years.

According to a statement on the club's official website, a joint press conference in the Auditori 1899 at Camp Nou was the venue for the formalization of an agreement whereby Europe's leading household appliance brand becomes a main partner of the club and the official sponsor of its training uniform.

The event was attended by the president of FC Barcelona, Josep Maria Bartomeu, the vice president of Koç Holding, the biggest conglomerate in Turkey and Beko's parent company, Ali Koç, as well as Barça first team player Gerard Piqué.

The statement also said the new agreement is a major step forward in the growth foreseen by the Strategic Plan passed by the Board of Directors for this mandate, and is part of the club's target of proactively seeking out the most suited partners to its own defining values and traits, and to find the world's best sports marketing contracts in each category.

As a result of this agreement, it said, the Beko logo will be appearing on the front of the first team training kit, as well as on the back, as it has done until now. The logo will also be remaining on the left sleeve of the playing strip as has been the case since the 2014/15 season.

President Bartomeu, who previously said the club is aiming to increase its revenue to 1 billion euros per year, said the deal will see the company's logo printed on the front of its training kit.

Barcelona and Beko signed a deal worth 10 million euros per year in 2014 to have the logo on the shirt sleeve, which will continue, with the new agreement seeing La Liga's leaders pick up 19 million euros a year.

Beko currently sponsors the sleeves of Barça's first team kit and the back of their training kit as part of a deal first signed in 2014.

"This association with a brand, which is a leader in its field, is vital for the club to continue to lead the elite of world football," Barça President Bartomeu said.

Barcelona said in September that they are on course to achieve a record income of 897 million euros for the 2017-18 season.

Barca is the only team in La Liga to have a sponsor on their training kit, mimicking Manchester United's pioneering deal with logistics giant DHL in 2011.

The deal to sponsor Barça's training kit eclipses 14 out of the 20 Premier League club's sponsorship agreements for their first team kit, according to figures from Sporting Intelligence, quoted by the Daily Mail.

Barça, who is seven points clear at the top of La Liga and faces Chelsea next week in a Champions League last-16 first leg tie, receives 55 million euros annually from their shirt sponsorship deal with Japanese firm Rakuten, signed in 2016.