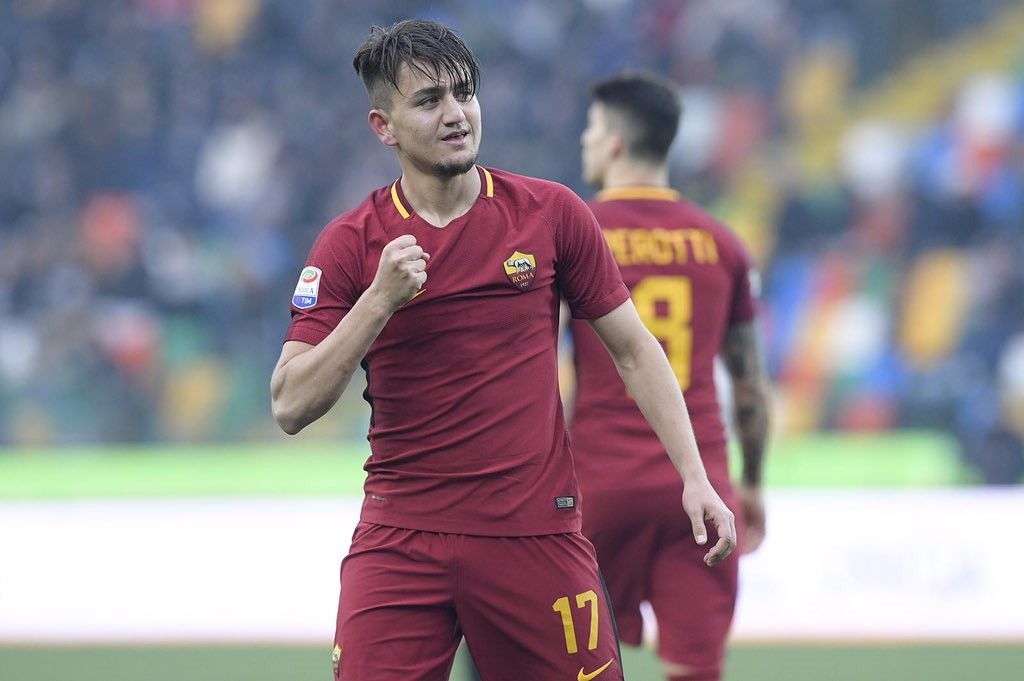 : Turkish international Cengiz Ünder has continued to prove his worth for Roma as he scored his fourth goal in three matches for the Italian club, helping it beat Udinese 2-0 Saturday

Turkey's 20-year-old winger Cengiz Ünder is playing a big role in Roma's Serie A revival. Ünder scored his fourth goal in three matches as Roma won at Udinese 2-0 for its third straight win in Serie A Saturday.

With the win, Roma moved into third place, two points ahead of Inter Milan, who lost at Genoa 2-0.

It's a drastic improvement from where Roma was a month ago when the Giallorossi were mired in a five-match winless streak that risked dropping them out of contention for the Champions League spots.

"We're getting back on track to where we were in the first half of the season," forward Diego Perotti said.

In the match against Udinese, Roma went ahead when Ünder unleashed a powerful shot from in front of the penalty box in the 70th minute. Perotti sealed the victory in the 90th minute with an angled effort after the Udinese defense gave the ball away near midfield.

Ünder is having a breakout month. First, he scored after 43 seconds when Roma ended a five-match winless streak by beating Hellas Verona 1-0. Then he scored a brace and delivered an assist in a 5-2 win over Benevento last weekend. All these after not being involved in any goals in his first 14 matches for Roma.

"He plays far more for the team than himself," Roma coach Eusebio Di Francesco said of Ünder. "His greatest strength is being able to prepare his shot with great speed, making him difficult to close down."

"He needs to improve his decision-making. Sometimes he plays with his head down and doesn't see the options. He's got fabulous technical ability as you can see. The thing he does best is setting himself up for the shot, he shows such quick feet," he said.

Roma forward Perotti said, "He's very humble and he doesn't speak Italian but he's well behaved and is a great kid. He deserves all of this."

"He had a great game," defender Federico Fazio said. "He's doing a great job, he's out there on the pitch trying to do what the boss asks and then away from it he is learning Italian. Now you are all talking about him, but he needs to keep his feet on the ground and continue as he has been, working hard and putting in great performances," he added.

On Wednesday, Roma visits Shakhtar Donetsk in the first leg of its Champions League Round of 16 match.

"We've got to make the most of the fact they've had a winter break and might not be match fit," Di Francesco said of the Ukrainian side. "They have a lot of quality in attack and are dangerous, but we shouldn't change our attitude."

Ünder rose to prominence last season when he scored seven goals in 32 appearances for Istanbul-based Medipol Başakşehir. He scored his first goal for the Turkish national team against Moldova in March last year. Football pundits have likened Ünder to Juventus's 23-year-old Argentine forward Paulo Dybala, both in appearance and rapid rise to fame as talented players.