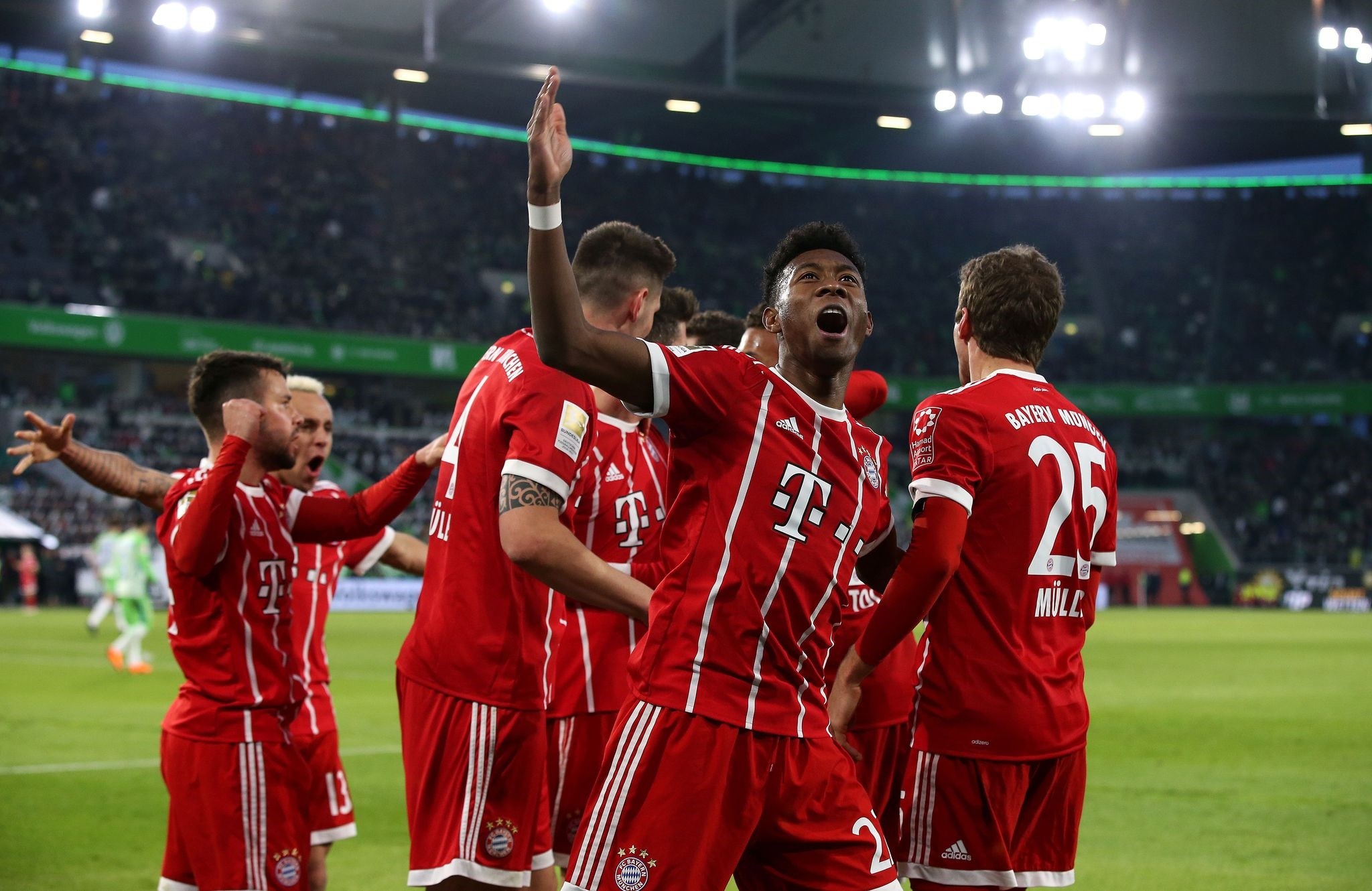 Bayern Munich's Austrian defender David Alaba (C) celebrates with teammates after they scored during the Bundesliga football match between VfL Wolfsburg and FC Bayern Munich on February 17, 2018. (AFP Photo)
by Feb 17, 2018 12:00 am

Robert Lewandowski converted a 90th-minute penalty as runaway Bundesliga leaders Bayern Munich hit back to beat VfL Wolfsburg 2-1 on Saturday while bottom club Cologne were denied a rare win by a video replay.

Bayern clocked up a 10th successive Bundesliga win despite falling behind to an early Daniel Didavi goal and missing a penalty when Arjen Robben's effort was saved by Koen Casteels after halftime.

With one eye on Tuesday's Champions League tie at home to Beşiktaş, Bayern made eight changes to their side and were stunned when Didavi headed Wolfsburg in front after eight minutes.

Wolfsburg's hardcore fans missed it, however, as they were outside protesting against the management of the club, founded in 1945, and had refused to enter the stadium until after 19 minutes and 45 seconds.

Bayern dominated possession and won a penalty early in the second half but Robben's shot was brilliantly tipped on to the post by Casteels.

Robben made amends in the 67th minute when he crossed for Sandro Wagner to head in at the near post and then won the second penalty, helped by teenager Gian-Luca Itter's naivety.

Robben burst into the area, but there seemed little danger until Itter grabbed the Dutchman's arm and sent him tumbling over. This time, substitute Lewandowski took the penalty and converted, although Casteels again got a hand to it.

Wolfsburg were left in 13th with 24 points, only one point ahead of Mainz 05 who are in 16th, the relegation playoff spot.

Cologne thought they had snatched an injury-time win over Hannover 96 when 39-year-old Peruvian forward Claudio Pizarro netted, but the celebrations were rudely interrupted.

The referee consulted the video assistant (VAR) and disallowed the goal for offside against Marcel Risse, and the game ended 1-1, depriving the Billy Goats of what would have been only their fourth win of the season.

Yuya Osako had given Cologne the lead after half an hour but Niclas Fuellkrug equalised for Hannover seven minutes later.

The draw left Cologne with 14 points, three points behind Hamburg whose proud record as the Bundesliga's only ever-present club is increasingly in danger after defeat to Leverkusen left them six points adrift of Mainz.