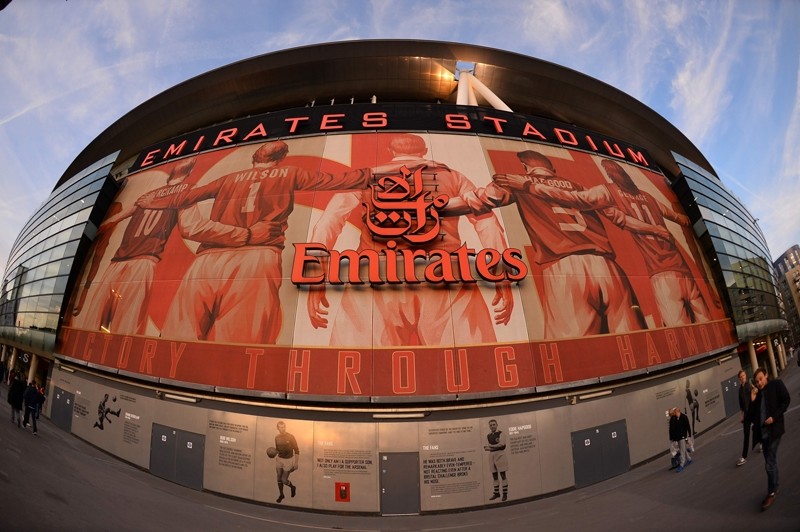 The Gunners confirmed the branding of Emirates, which began its sponsorship agreement with the north London club in 2006, would continue to feature on the shirts and training kit of all of their teams until the end of the 2023/2024 season.

The size of the deal, quoted by the BBC as being worth more than £200 million ($280 million) reportedly puts the club level with Premier League rivals Chelsea, behind only Manchester United, who have a seven-year agreement with Chevrolet worth $559 million.

"Our shirt partnership is the longest-running in the Premier League and one of the longest relationships in world sport," said Ivan Gazidis, chief executive of Arsenal, who have not given a figure for the deal.

"This mutual commitment is testimony to the strength and depth of our unique relationship."

"Emirates are again demonstrating their great belief in our approach and ambition and their significantly increased investment will help us continue to compete for trophies and bring more success to the club and our fans around the world."

Emirates president Sir Tim Clark said: "Arsenal's strong appeal and influence around the globe, combined with their ambitions as a club, make them an ideal partner for Emirates, with values that reflect ours as a brand.

"As a long-standing supporter of football, we are passionate about the game and are a proud partner to the team."

Emirates have held naming rights to Arsenal's 60,000-seater stadium since the Gunners moved in during 2006, with that deal set to run until 2028.

Arsenal, currently sixth in the Premier League table, eight points behind fourth-placed Chelsea, are desperate to secure Champions League football for next season after missing out this year.

On Sunday they meet Premier League leaders Manchester City in the final of the League Cup at Wembley.

Deloitte's "Money League" report last month ranked Arsenal in sixth place behind the likes of Manchester United and Real Madrid but a separate study said Arsenal had greater financial muscle than any club in world football with the exception of Manchester City.