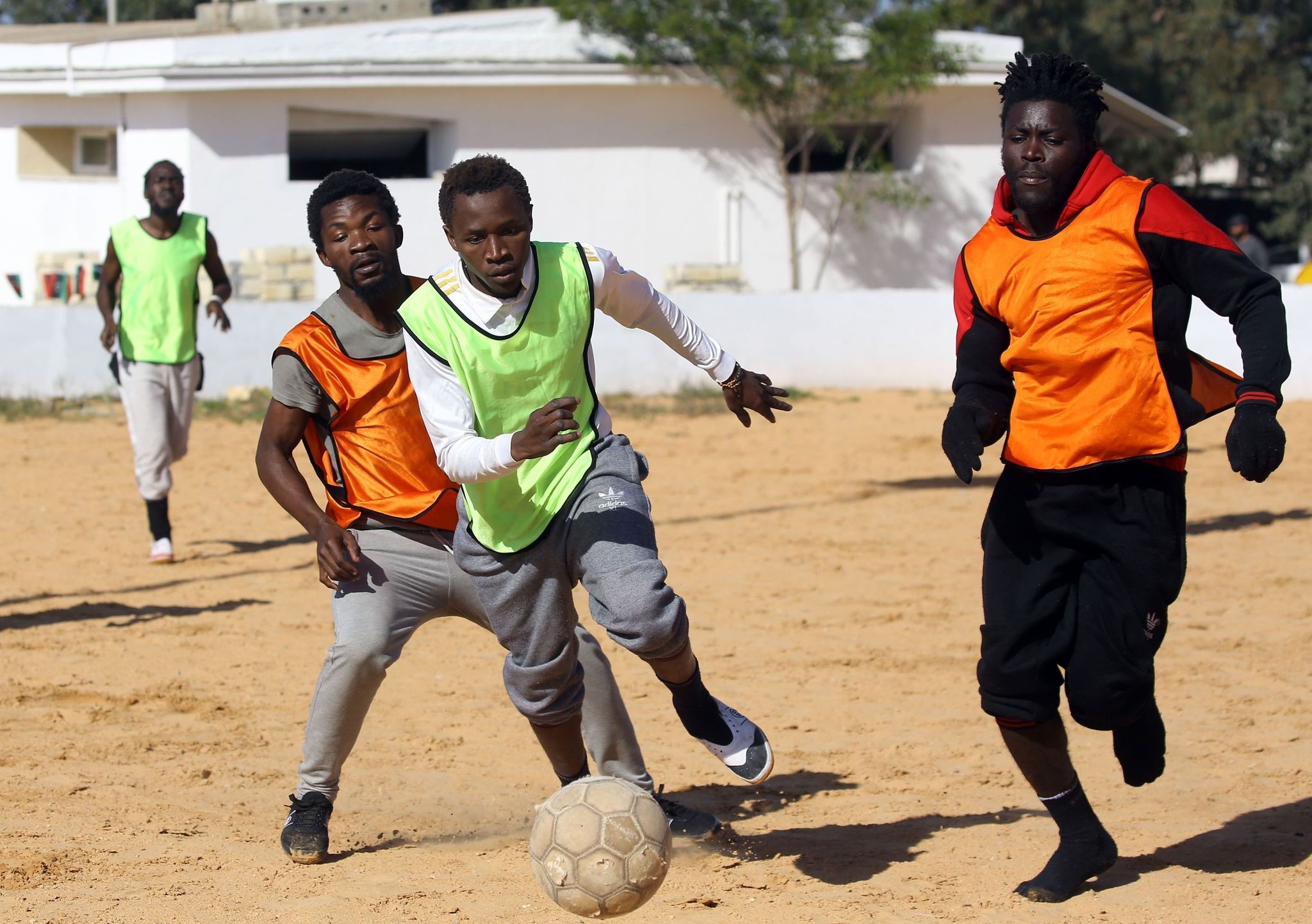 European football glory is a dream for many illegal migrants in Libya, and a migrant camp in Tripoli will hold a tournament with players selected from among 500 detainees who have languished for months in the detention center

The Tajoura migrant camp on the edge of Libya's Tripoli was the scene of a clash between lions: teams of Cameroonian and Senegalese footballers whose dream is to play in Europe. The Indomitable Lions and the Lions of Teranga took their names from those of their national teams, but the match had little of the atmosphere of African sports events. Played on a sandy pitch marked out by a low white wall, in front of a prison building, its only spectators were two prison guards. The teams had been thrown together, their players selected from among 500 inmates who have languished in detention for months.

The luckiest players had shoes, but others tread the makeshift stadium in their socks. Fluorescent yellow bibs for Senegal, orange for Cameroon, the migrants took the game deadly seriously. After the warm-up, hand in hand, they saluted their two spectators.

"I can't take it anymore. I haven't had any physically activity for months, we don't move in prison," he said.

"Plus, we're amateurs," he added. "The Cameroonians are real players who played for teams."

The match continued without him, and the score left no doubt: the Cameroonians won 4-0. Mamadou Awal, 21, said he was proud of the victory. A midfielder like his idol, former French superstar and Real Madrid coach Zinedine Zidane, Awal left Cameroon aged 17 in a bid to reach Europe and become a professional footballer after a few years in a training center in his country.

"But destiny decided otherwise," he said. After boarding a boat headed for Europe, he was arrested at sea.

"In Libya, I suffered a lot: it's my third time in prison," he said.

Each time he attempted the crossing, the Libyan navy caught him. European glory is also the dream of his teammate, Takoute Styve, who quit his studies "to devote myself to football."

"When I saw (Cameroonian stars) Roger Milla and Samuel Eto'o, I wanted to become like them," Styve said.

After attending two training centers and playing for two second-division teams in Cameroon, Ukamou Lobu left his home town of Douala at the age of 16 to attempt the crossing to Europe.

"I tried to leave Algeria and then Morocco but I did not succeed," he said. He has also been arrested several times and has seen other migrants die at sea. He dreams of playing for Arsenal. But 22-year-old Seryne Diokhane said he has "nothing to do with football."

"It's just an opportunity for me to get out of jail for a while," he said. "When they asked who can play, I answered 'me' right away."

He was interrupted by a camp official, Faraj al-Guilouchi, who asked the migrants to return to their cells.

"We organize matches every week to try to alleviate their suffering," Guilouchi said. "Most of them have suffered psychological shocks, either because they have tried and failed sea crossings or because they have lost loved ones." He said the camp would soon try to organize a tournament among various African nations.

"No thanks, all we want is to leave this place," a migrant said in a low voice, as the metal door of the prison closed behind him.