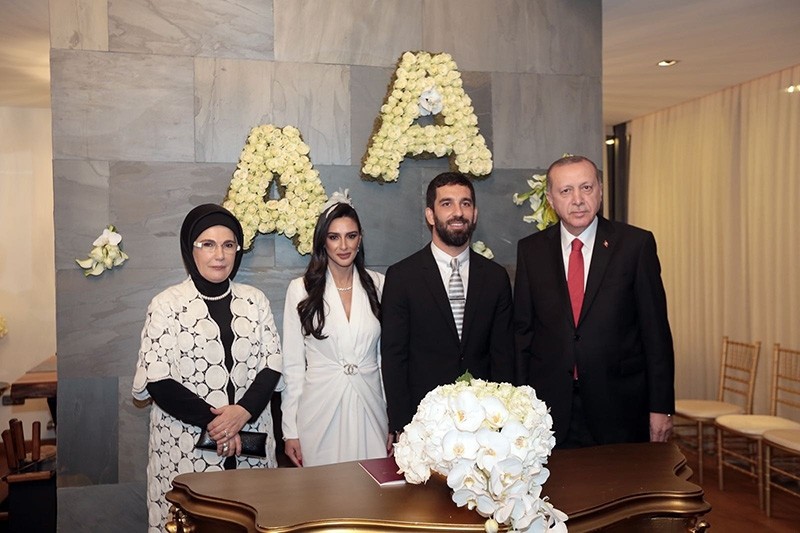 Erdoğan's presence was a striking symbol of the hardman footballer's close ties with the Turkish president.

The pair were married in a private wedding ceremony at the Çubuklu Vadi compound in Istanbul's Beykoz district.

President Erdoğan attended the wedding with first lady Emine Erdoğan, according to Hürriyet daily, which shared a picture on its website showing the high-profile guests at the ceremony.

Turan has repeatedly expressed strong support for Erdoğan, attending rallies to back "my commander-in-chief" following the July 2016 attempted coup.

He also made headlines in Turkish media earlier this month by saying it would not be appropriate to have a full scale wedding as Turkey was "at war," referring to its military operation in Syria against PKK-affiliated People's Protection Forces (YPG) terrorists.

Turan has strongly supported the operation and gave a military salute to the soldiers after scoring a goal.

In January, Istanbul's fast-rising Başakşehir signed midfielder Arda Turan on a two-and-a-half season loan deal from Barcelona. Başakşehir have risen rapidly over the last two seasons to rival the established Istanbul triumvirate of Beşiktaş, Fenerbahçe and Galatasaray. Formerly known as Istanbul Büyükşehir Belediyesi Spor (IBB), the club changed their name in 2014 to Başakşehir.

The 30-year-old joined Barcelona from Atletico Madrid for 34 million euros plus add-ons in July 2015, winning six trophies but only making 55 appearances and scoring 15 goals at the Camp Nou.

Turan has two years left on his Barca contract but will see it out in Istanbul. However, Barcelona can still sell the player during that period if they accept an offer for him.

Başakşehir are in third place in the Turkish league and remain in contention for the title despite a 4-1 away drubbing at the hands of Alanyaspor on Friday.