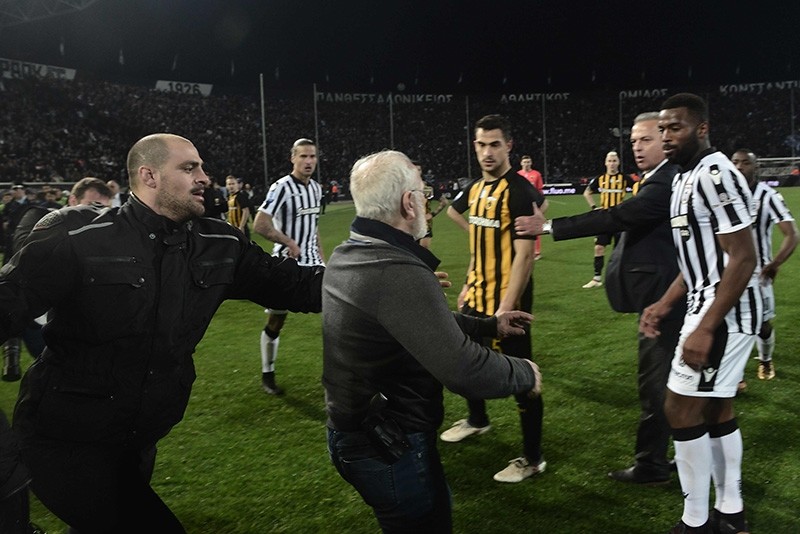 Paok president Ivan Savvidis (C) takes to the pitch carrying a handgun in his waistband (below C), after the referee refused a last minute goal (AFP Photo)
by Compiled from Wire Services Mar 12, 2018 12:00 am

Greece's top-flight football championship was suspended Monday, a minister said, hours after the owner of the PAOK team came onto the pitch with a gun strapped to his belt.

"We have decided to suspend the championship," deputy minister for sports Yiorgos Vassiliadis told reporters after an emergency meeting with Prime Minister Alexis Tsipras.

Minister Giorgos Vasileiadis, said league play would not restart "if there is not a new, clear framework agreed to by all so we can move forward with conditions and regulations."

The game between PAOK Salonika and league leaders AEK Athens was suspended on Sunday when, enraged by a disallowed goal against his team, PAOK chairman Ivan Savvidis entered the field of play to confront the referee while carrying a holstered pistol. A warrant was issued for his arrest on Monday.

The referee and his assistants fled for their dressing room. Two hours after suspending the game, the referee told the captains of both teams that he had changed his mind and that the goal stood, whereupon the AEK players refused to take the field to play out the remaining few minutes.

It is not the first home game that PAOK have failed to complete this season. Their match against Olympiakos on February 25 was suspended before kick-off after the visitors' coach Oscar Garcia was struck on the head by a toilet roll thrown by a PAOK fan.

The game did not take place and Olympiakos were awarded a 3-0 victory.