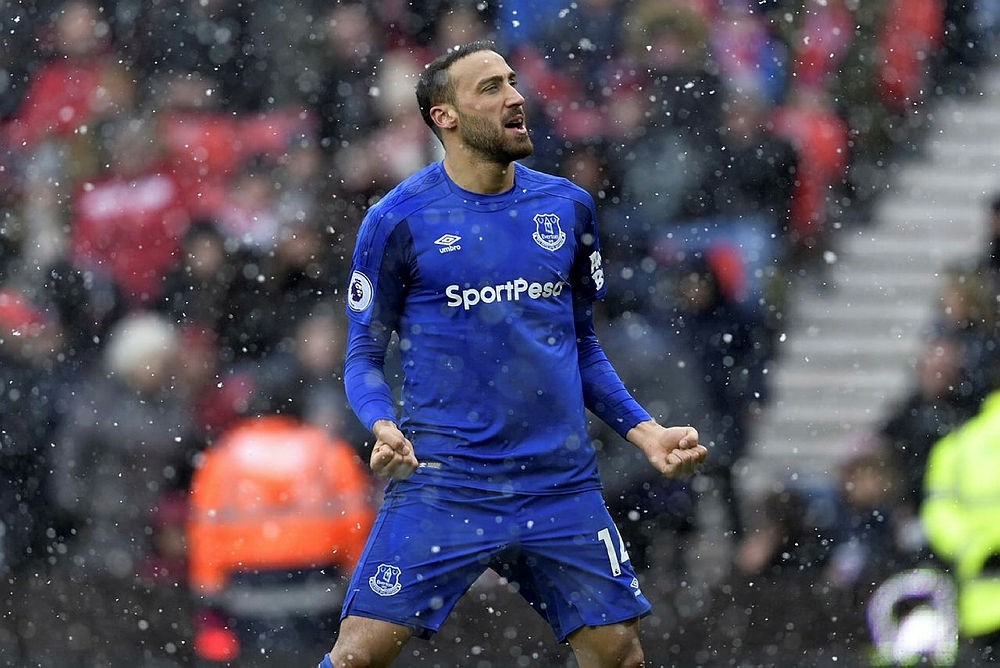 Turkish forward Cenk Tosun struck twice after the break as Everton beat a 10-man Stoke City 2-1 in the snowy Midlands to end a miserable away run in the Premier League and deepen its host's relegation fears on Saturday.

Stoke had Charlie Adam sent off before halftime for a rash foul on Wayne Rooney but defended resolutely to hold the visitors at bay until the 69th minute when Tosun scored from close range after having a first attempt saved.

When substitute Eric Maxim Choupo-Moting poked in Joe Allen's free kick in the 77th minute, injuring himself in the process, it seemed second-bottom Stoke might salvage an important point in the relegation scrap. But its hopes were crushed when Tosun beat England keeper Jack Butland with a diving header from Theo Walcott's delivery to end a run of five straight away league defeats for Everton and take the side to 40 points.

Stoke remained three points below the safety zone and with games against Arsenal, Tottenham Hotspur and Liverpool next month, its 10-year residence in the top flight is in peril.

Tosun's stylish second goal, his fourth in three games, earned Everton back-to-back league wins for the first time since December, and the 26-year-old said he was now up to speed after his big-money move from Beşiktaş in January.

"I think I've settled in very well. I feel better," he said.

Sam Allardyce took aim at those who had criticized his decision to introduce Cenk Tosun slowly at Everton. He said, "I think his confidence is gained by us taking him out early doors when everyone was going: 'Why aren't you playing him?'"

"You know, it's the usual rubbish you get from outside the football club. They say: 'You pay all that money and don't play him, why not?' That's because they don't know. I do, they don't.

"We wanted to get him fitter, and more used to the players he was playing with. A lot of the training and extra training he's done, especially in Dubai, has paid dividends not only for us but for him and long may it continue."

Allardyce was understandably delighted for Everton to end its poor away run, having gone five games without even a point away from Goodison Park prior to the victory.

He added: "I think we deserved to win, with them being down to 10 men and us dominating possession, but they gave us a good fight.

"We had a goal scorer at one end who was clinical and turned the game in our favor with the first goal and when we sloppily gave a free kick and gave a goal away he pops up with a second which was a wonderful finish and a wonderful cross."